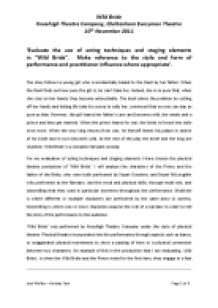 Evaluate the use of acting techniques and staging elements in Wild Bride. Make reference to the style and form of performance and practitioner influence where appropriate.

﻿Wild Bride Kneehigh Theatre Company, Cheltenham Everyman Theatre 10th November 2011 ?Evaluate the use of acting techniques and staging elements in ?Wild Bride?. Make reference to the style and form of performance and practitioner influence where appropriate?. The story follows a young girl who is accidentally traded to the Devil by her father. When the Devil finds out how pure the girl is, he can?t take her. Indeed, she is so pure that, when she cries on her hands, they become untouchable. The devil solves the problem by cutting off her hands and letting life take its course to sully her, convinced that no one can stay as pure as that. However, the girl leaves her father?s care and becomes wild, she meets and a prince and they get married. When the prince leaves for war, the bride is forced into exile once more. When the now king returns from war, he himself leaves his palace in search of his bride and in turn becomes wild. At the end of the play the bride and the king are reunited. ?Wild Bride? is a romantic fairytale comedy. ...read more.

Through use of an Irish accent Stuart Goodwin made the Father seem a more lovable and friendly character. Whilst performing the role of the Father, Stuart Goodwin increased the volume of the Father?s dialogue to that above normal conversation level on stage, this added to the effect of the stigma that was made apparent, and is attached to the Irish accent of being happy and cheerful. Later on in the performance, Stuart Goodwin depicted the Prince with a strong Scottish accent, which helped to emphasize the outlandish behaviour of the Prince. The Prince behaved outlandishly by moving extravagantly, using dance like movements, across the stage. The Prince?s movements were quick and darting. This type of physical movement to introduce a character and create an audience?s response to that character is typical of Kneehigh Theatre Company?s physical theatre productions. The two contrasting accents, Irish and Scottish, illustrated the dissimilarity between the two characters, the Prince, and the Father. The Father?s pitch was quite low and he slurred his words quite often as he had been drinking his ?homemade mountain brew?, the Father?s tempo was slow to represent this, but picked up, and he began to speak louder when he was talking to the audience. ...read more.

As the narrator of the performance Stuart McLoughlin used the aspect of storytelling directly towards the audience. Whilst narrating Stuart McLoughlin would be positioned high above the other characters on stage in a tree that was used as a prop. Through the high positioning the audience?s attention was drawn to Stuart McLoughlin and he became a focal point during his monologues. However, he did not detract the audience?s attention from the plot unfolding on stage below. The other characters did not acknowledge McLoughlin whilst he was narrating the performance which helped to separate him from the action on stage. Vocally the narrator spoke with a sing song, laid back tone of voice. Stuart McLoughlin spoke loudly projecting his voice out to the audience. The tempo in which the Narrator spoke was slow and paced. Another vocal effect that was incorporated into Stuart Goodwin?s performance was the quick reversion between the characters of the Prince, and the pears. I thought this vocal skill was used to great success as it provided a witty way of flexing Stuart Goodwin?s vocal skills and talents to a comical effect. This was both entertaining and captivating because he managed to create two completely contrasting characters, which were both believable and enjoyable to watch. Word count: 2,023 ________________ Jack Wellby ? Holiday Task Page of ...read more.