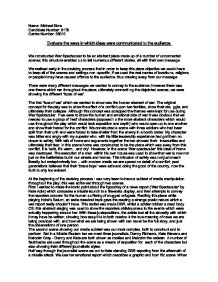 Evaluate the ways in which ideas were communicated to the audience

Name: Michael Sims Candidate Number: 8178 Centre Number: 56515 Evaluate the ways in which ideas were communicated to the audience We constructed War Spectacular to be an abstract piece made up of a number of unconnected scenes; this structure enabled us to tell numerous different stories, all with their own message. We realised early in the devising process that in order to keep this piece objective we would have to keep all of the scenes and settings non-specific, if we used the real names of locations, religions or people it may have caused offence to the audience, thus drawing away from our message. There were many different messages we wanted to convey to the audience; however there was one theme which ran throughout the piece, ultimately connecting the disjointed scenes; we were showing the different 'faces of war'. The first 'face of war' which we wanted to show was the human element of war. The original concept for the play was to show the affect of a conflict upon two families, show their struggle, and ultimately their collapse. Although this concept was scrapped the themes were kept for use during War Spectacular. If we were to show the human and emotional side of war it was obvious that we needed to use a group of 'real' characters (opposed to the more abstract characters which would use throughout the play which would lack exposition and depth) ...read more.

This recital was made DSR, whilst a soldier robbed a dead body CS; this abstract staging was used to show the reporters obliviousness to the events which were actually happening around her. With these juxtapositions, the article lost all the sincerity with which it may have be written; showing how easy it is to both overlook the true meaning of news we are being provided with, and how what we are being shown with can never be the full story, and just the observations of one person. The second scene showing our media subtext was our most complex, both to construct and to perform. Set in a Middle Eastern bar we meet three journalists, Danny Richards, Kate Stevens and Malcolm Grey - Danny and Kate are both shown as rookies and Malcolm the veteran. A number of flashbacks are used throughout the scene as a means of exposition for each of the characters but also showing their different journalistic styles. Half way through the journalist scene we cut to Kate standing DSR reporting from the aftermath of a missile attack. We see her emotional report which describes a graphic and horrific scene. When her report is finished she asks the cameraman 'brutal enough?' ...read more.

In contrast to this very new attitude to war we wanted to depict a very old fashioned warfare which looking back on it is now highly comical. The 'new generation' of weaponry was presented to the audience in the form of a '1950's style' advert. The main purpose for this scene was to provide the audience with a comic relief from the seriousness of the play. However, whilst this was an opportunity to relax placing this scene previous to the suicide bomber scene it to show a drastic change in attitude to warfare, whilst the character of the advert believed that that their weapons would drive the empire into the 20th century, the suicide bomber represents a very modern and much more dangerous enemy; one which does not have a flag or country, but just a cause and the will to cause destruction. The piece was concluded with the recital of the poem, 'All things are connected' which we quoted for the opening sequence. With lines such as 'Man did not weave the web of life, he is merely a strand in it' it worked well to convey our themes of unison as a race - although the hope of total peace is a fantasy, it is the theme which ultimately runs throughout the whole of the piece. ...read more.