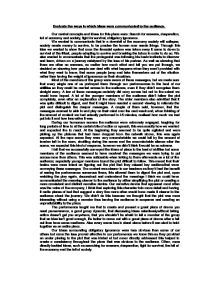 Evaluate the ways in which ideas were communicated to the audience.

Evaluate the ways in which ideas were communicated to the audience. Our central concepts and ideas for this piece were: Search for answers, desperation, fall of economy and society, fight for survival, obligatory ignorance. We wanted to communicate that in a downfall of the economy society will collapse; society needs money to survive, to be precise the human race needs things. Through this idea we wanted to show that once the financial system was taken away it came to down to survival of the fittest, people adapting to survive and breaking the taboo in order to do so. We also wanted to communicate that the protagonist was following his basic instincts to discover and learn, driven on a journey catalysed by the loss of his partner. As well as showing that there are often no answers, no matter how much effort and toil you are put through, we decided on showing how people can deal with what happens when they aren't provided with what they want to know, that some people jump and take themselves out of the situation rather than having the weight of ignorance on their shoulders. Most of the members of the group were aware of these messages, but we made sure that every single one of us portrayed them through our performances to the best of our abilities so they could be carried across to the audience, even if they didn't recognise them straight away. ...read more.

Our narrative device that appeared most often was the voice of the company, I think that exploring this character into more detail and having it recite pieces of text that suggest a story line more often would have made it clearer to the audience about the journey. We didn't do this because we thought that the plot was more interesting without using a narrator thus leaving the audience in suspense and creating an unpredictability to the piece. The performance taught me that to create and present a great piece of drama you need perseverance, a good group dynamic, that discussing ideas relentlessly without taking action doesn't get you anywhere, that you shouldn't be afraid to tell a member of the group that an idea isn't good enough, it's better to come out with a great piece of drama after a fall out than have some mediocre. Also every scene has to stand alone before it can start to hold together as an entire piece. Our ideas surrounding obligatory ignorance were less obvious than some of our others but none the less proved effective in our performance we know this as they provided an under pinning to the plot that was hinted at but never directly addressed this helped to create a consistency throughout the piece that was obvious to the audience. Other, more directly tackled ideas, such as searching for answers, desperation, fight for survival, the fall of the economy and the fall of society. ...read more.

We did this to convey that the people who the protagonist meets are people who have dealt with this forced lack of answers in different ways and that the characters in each scene will always be completely opposite to ones in a previous or following scene. We attempted to communicate this by confusing the audience, we showered them with pictures to intrigue them and want to find out answers like the protagonist. We wanted make it infuriating so that when the protagonist was denied the information he wanted from the Wise man and the bosses they would be equally as distraught. Audience members were definitely infuriated about the lack of answers that were given, which is exactly what we wanted. This made sure that they would be thinking about the play after they'd left and, hopefully, relate it to the current day. Fight for survival: This idea is providing an obstacle for the protagonist to face, making the plot interesting. We included this theme also to explore the primitive nature in which the human race would have to revert to in order to survive without the security of something that no longer exists. This is communicated through the challenges the protagonist face i.e. the prostitute scene, the war scene and the memory scene. In the latter the last person to speak reveals the dog eat dog world and kills herself for recessing to her primal instincts. This was definitely clear, talking to the audience afterwards a member said 'That [world] as a bit rough wasn't it?' so it carried well. ...read more.