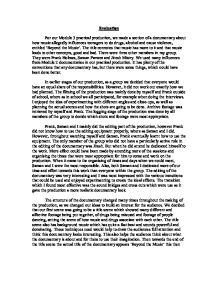 Evaluation - For our Module 3 practical production, we made a section of a documentary about how music allegedly influences teenagers to do drugs, alcohol and cause violence, entitled 'Beyond the Music'.

Evaluation For our Module 3 practical production, we made a section of a documentary about how music allegedly influences teenagers to do drugs, alcohol and cause violence, entitled 'Beyond the Music'. The title connotes that music has more to it and that music leads to other concepts, good and bad. There were three other members in my group. They were Frank Holmes, Saman Parwez and Jitesh Mistry. We used many influences from Module 2 documentaries in our practical production. It has plenty of the conventions that any documentary has, but there were some things, which could have been done better. In earlier stages of our production, as a group we decided that everyone would have an equal share of the responsibilities. However, it did not work out exactly how we had planned. The filming of the production was mainly done by myself and Frank outside of school, where as in school we all participated, for example when doing the interviews. I enjoyed the idea of experimenting with different angles and close-ups, as well as planning the actual scenes and how the shots are going to be done. ...read more.

The title scene also has background music which has quite a fast beat and sounds powerful and dominating. These techniques used would help to draw the audiences full attention and think this documentary looks interesting. This also helps the audience think about what the documentary is about and for them to use their imagination. Then towards the end of the title scene the actual title of the documentary appears 'Beyond the Music' this then helps the audience to realise that drugs, alcohol and music some how relate. At this stage the audiences full attention is captured. The final product contains many of the narrative techniques used in conventional documentaries that we studied in Module 2. We found that mise-en-scene played an important part when it came to constructing the image of where people go to smoked drugs as it was helpful in an interview scene. I mainly focused on one documentary which I had seen on channel 4, entitled 'On the Streets'. This documentary was about how people everywhere in the UK misuse drugs. ...read more.

The expectations of the documentary is that the primary audience should feel cheated and exposed, and the secondary audience should feel fulfilled and informed. The way everyone is represented in the documentary is quite negative but accurate, also the production is biased as it only shows that music influences drug and alcohol abuse. We have many strengths about our finished work. Throughout the editing, we were able to put the right kind of mood to the subject. For example, the title scene, we managed to get a powerful, interesting and attention capturing scene. Also throughout the production we managed to get views from different people and effective symbolic meanings. Even though our production is a good success, we had weaknesses too. We had a problem with the amount of time we had to do the production and editing, because we actually wanted to make the production longer, as well as certain footage which we wanted to put in had to be left out. Also we had a problem with people's dedication to the production, as some members did not take it seriously. But that did not stop us from making a well-made practical production. By Pradip Maisuria Word Count: 1,150 ...read more.