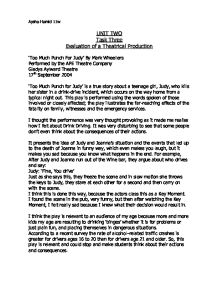 Evaluation of a Theatrical Production - 'Too Much Punch For Judy' By Mark Wheellers.

Aysha Hamid 11w UNIT TWO Task Three Evaluation of a Theatrical Production 'Too Much Punch For Judy' By Mark Wheellers Performed by the APE Theatre Company Gladys Aylward Theatre 17th September 2004 'Too Much Punch for Judy' is a true story about a teenage girl, Judy, who kills her sister in a drink-drive incident, which occurs on the way home from a typical night out. This play is performed using the words spoken of those involved or closely affected; the play illustrates the far-reaching effects of the fatality on family, witnesses and the emergency services. I thought the performance was very thought provoking as it made me realise how I felt about Drink Driving. It was very disturbing to see that some people don't even think about the consequences of their actions. It presents the idea of Judy and Joanna's situation and the events that led up to the death of Joanna in funny way, which even makes you laugh, but it makes you sad because you know what happens in the end. For example, After Judy and Joanna run out of the Wine bar, they argue about who drives and say: Judy: 'Fine, You drive' Just as she says this, they freeze the scene and in slow motion she throws the keys to Judy, they stare at each other for a second and then carry on with the scene. ...read more.

I think they used this music as a reference to what they were doing. As you listen to the song, you associate words and phrases like, Going out, Clubbing, and getting drunk to the song. The music defiantly sets the mood and atmosphere for the actors to work in, as it relates to the events and times that it is played. This was very different compared to the text because again you had to picture it rather then have it performed in front of you. I think that the music really set the scene for the characters. The story was told using actors who spoke the exact words at the time of the accident and the events leading up to it. Using monologues was effective because you got to hear the actual words and thought of the actual witnesses and family members at the time of the accident. One character who I thought definitely brought her character to life was Judy. The scene at the end, where she does her monologue about what would have happened if she could turn back time was exceptional. She was so realistic and believable. Through out the play, she portrayed her character of Judy in depth and with emotion. ...read more.

Whilst watching the scene the music became loud and all you could do was watch until 'it' happened. The use of poles was good, watching the poles go through the imaginary windscreen made me cringe at the thought of the poles knocking back Joanna's head with such force that it broke her neck clean off. Watching the accident made me feel so sad, the use of the loud music made such an impact on me and I think most of the audience. This was a Documentary piece of theatre, as the actual monologue was used and even really photographs which were taken at the time. This made the play come to life just that bit more. Even though the slides are 20 years old they still have an effect on you, as you are seeing the actual scene were such a horrific accident took place. I think the plays message was simple 'Don't Drink and Drive' From watching this play, it made me realise how selfish drink drivers really are. The thought of knowingly getting into a car when you're drunk and not even considering the thought that you might actually kill or injure someone, is just stupidity. The performance was a brilliant way and really brought the characters to life. Hopefully, drink drivers will watch the performance and make them think the next time they try to get into a car whilst drunk. ...read more.