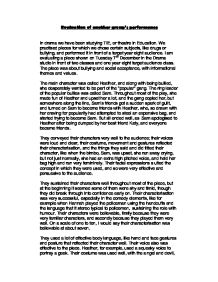 Evaluation of another group's performance

Evaluation of another group's performance In drama we have been studying TIE, or theatre in Education. We practised pieces for which we chose certain subjects, like drugs or bullying, and performed it in front of a target year eight audience. I am evaluating a piece shown on Tuesday 7th December in the Drama studio in front of two classes and one year eight target audience class. The piece was about bullying and social acceptance, with informational themes and values. The main character was called Heather, and along with being bullied, she desperately wanted to be part of the "popular" gang. The ring leader of the popular bullies was called Sam. Throughout most of the play, she made fun of Heather and upset her a lot, and the gang copied her, but somewhere along the line, Sam's friends got a sudden spark of guilt, and turned on Sam to become friends with Heather, who, so drawn with her craving for popularity had attempted to steel an expensive bag, and started trying to become Sam. ...read more.

Their characters were believable, firstly because they were very familiar characters, and secondly because they played them very well. On a scale of one to ten, I would say their characterisation was believable at about seven. They used a lot of effective body language, like hand and face gestures and posture that reflected their character well. Their voice also was effective to the piece. Heather, for example, used a squeaky voice to portray a geek. Their costume was used well, with the angel and devil, and was effective because you knew immediately what they were. The characters also used props, like the clipboard the angel was holding and reading, which gave a sense of organisation. The bag was also useful in the stealing scene, because you knew at once what she was stealing, and when you don't have to work out things like that, you can concentrate on the piece itself. The group used a few explorative elements and drama mediums. They used for example, freeze frames these were valuable and effective because you could tell what they were when the happened, and could see things like thought tracing and conscience alley behind the scenes. ...read more.

Without humour, the piece would have been boring and most of the audience wouldn't have liked it. I think they did achieve what they set out to do, as they entertained while informing, and formed a good piece of TIE drama, although it would have been better with more information. The atmosphere created was alright. There wasn't much tension, or a climax of any kind, but uses of silence and music worked well. Voice projection and accent was also used effectively. The overall strength of the piece in my opinion was the characterisation; the development of voice and costume. The overall weakness was probably the blocking; it did ruin some scenes and therefore affect the entire performance. I think the audience definitely enjoyed the piece, whether or not they saw the meaning of it is another question. But any negative response is mostly due to the lack of understanding the project and goal; TIE. In conclusion, I think this piece was very good, and I give it 7/10 for effort, 7/10 for characterisation, 7/10 for staging and 4/10 for use of drama mediums. Basically, I give it 28/40, which is a c grade. ...read more.