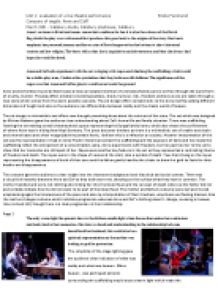 Evaluation of the Performance of &quot;Anne and Zef&quot; by Ad de Bont

﻿Unit 1: evaluation of a live theatre performance Emilie Farrimond Company of angels: Anne and Zeff March 26th - Salisbury studio, Salisbury playhouse, Salisbury Anne?s costume is fitted and seems somewhat a uniform for her it is also the colours of the Dutch flag which the play was written and first produce, this goes back to the origins of the story. Her boots emphasis her personel journey and have a star of David engraved on the bottom to show historical context and her religion. The boots tell us that she is inquisitive and adventurous and that she always had hope she would be freed. Anne and Zef both experiment with the set swinging with ropes and climbing the scaffolding, which could be a childs-play area , I believe this symbolises that they both are still children. The significance of the ropes was that Anne and Zeff as ghosts would never touch the ground Anne and Zef written by Ad de Bont looks at how an isolated member of a timeless family can be set free through the worst form of cruelty, murder. ...read more.

The costume gave the audience a clear insight into the characters background and historical and social context. There was a visual link instantly between Anne and Zef as they both wore red, showing on the surface what they have in common. The mother handled and wore red clothing also linking her into the blood feud and the concept of death where as the father did not and verbally indicate how he did not want to be part of the blood feud. The mother and fathers costume were dull and muted emphasising again the timelessness of the piece and also my interpretation of their tiredness, emptiness and feeling drained. Also the mother changes costume which indicates progression whereas Anne and Zef?s clothing doesn?t change, meaning in heaven time is stood still, though there is a clear progression in their relationship. Page 1 The only warm light the parents have is the kitchen candle light when the mother makes her confession and looks back at her memories; this shows a bond and understanding in the relationship between herself and her husband, this could also be a spiritual representation as the mother was looking to god for protection. ...read more.

A scream shortly followed the gunshot which was the mother who entered from the audience a form of communication and how this could happen to anyone. The engaged audience automatically focused on the mother as we felt sympathy for the family. Aural impacts created atmosphere. Another form of aural affects was the singing of Anne , after a while all the characters join in singing and this shows unity and a connection between life and death, even though characters in reality did not show any interaction with Anne and Zef creating even more of an illusion that they were ghosts. There was also sound of props which were usually handled by the mother and were an extension of her own. Through the directing of Ben kidd this translation is retold and brought to life by an exciting set which captures the audiences imagination and engagement straight-away. The growing relationship between Anne and Zef captures the emotions of the audience as they are free from the reality, conflict and pain. I believe this reflects an imaginative interpretation of how death should be and how we should worry less and dream more. Page 2 Word count ; 1,025 ...read more.