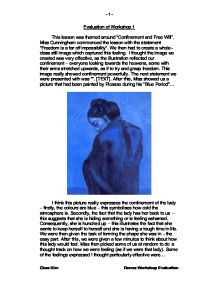 Evaluation of Workshop 1 This lesson was themed around "Confinement and Free Will". Miss Cunningham commenced the lesson with the statement "Freedom is a far off impossibility". We then had to create a whole-class still image which captured this feeling. I thought the image we created was very effective, as the illustration reflected our confinement - everyone looking towards the heavens, some with their arms stretched upwards, as if to try and grasp freedom. This image really showed confinement powerfully. The next statement we were presented with was "". [TEXT]. After this, Miss showed us a picture that had been painted by Picasso during his "Blue Period"... I think this picture really expresses the confinement of the lady - firstly, the colours are blue - this symbolises how cold the atmosphere is. Secondly, the fact that the lady has her back to us - this suggests that she is hiding something or is feeling ashamed. Consequently, she is hunched up - this illustrates the fact that she wants to keep herself to herself and she is having a tough time in life. ...read more.

Our final task was to create a role play on how this painting came to exist. My group consisted of Paul, Charles, Kasun and of course, myself. The basic plot idea was simple. Paul was to play Picasso, the painter. He would go to a prison to paint a prisoner for his "Blue Period". I would be the prisoner he painted, and yes, that inevitably meant that I would have to put a wig on! Charles would be the prison guard and Kasun would be another prisoner. The "draft performances" went well and everyone seemed to be confident with their lines. However, performing was different. The initial bit went well until Kasun went a bit "over the top" being a prisoner. His silly "lemme out" became annoying, and frankly, was a bit stupid. Then came my part. Picasso (Paul) came to my "cell" to do the painting, but the audience couldn't really see my face, yet alone my facial expressions, as bits of the wig kept flopping over my face. ...read more.

This seemed to sadden him, as he fell to the floor, head in hands. This was designed to emphasise the sadness and depression he was experiencing. This would've been a powerful piece of acting if he wasn't smiling through his fingers. He then went home to paint with the colours he had left, and eventually painted that lady (Shown to the class by Picasso when he had finished) This play reflected the depression Picasso was going through before he commenced his "Blue Period" This was a powerful play - Picasso experienced one disappointment after another, and it was clear that the audience could relate to how he felt. Prior to the opening statement, we brainstormed a number of ideas about physical and mental confinement. For the monologue at the beginning of the lesson, I intended to say "Why did I do it? Was it really worth it? I've got nothing out of it but a life in this hell hole" This was designed to show the audience that I hated prison and that I was feeling sorry for myself. The way my shoulders were slumped was designed to show that I was experiencing problems and having a tough time. - 1 - Chee Kim Drama Workshop Evaluation ...read more.