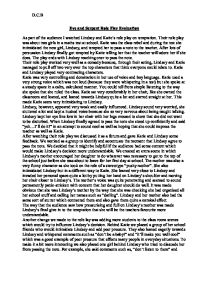 Eve and Serpent Role Play Evaluation As part of the audience I watched Lindsey and Katie's role play on temptation. Their role play was about two girls in a maths test at school. Katie was the class rebel and during the test she intimidated the new girl, Lindsey, and tempted her to pass a note to the teacher. After lots of persuasion Lindsey finally got tempted by Katie telling her that the teacher will adore her if she does. The play ends with Lindsey reaching over to pass the note. Their role play worked very well as a comedy because, through their acting, Lindsey and Katie managed to pull off two very over the top characters that think everyone could relate to. Katie and Lindsey played very contrasting characters. Katie was very controlling and domination in her use of voice and boy language. ...read more.

in an attempt to sound cool as well as hoping that she could impress the teacher as well as Katie. After watching their role play we discussed it as a forum and gave Katie and Lindsey some feedback. We worked as a group to identify and accentuate the moment that Lindsey agree to pass the note. We decided that it might be helpful if the audience had some context which would make Lindsey's decision more understandable. We created an extra scene in which Lindsey's mother encouraged her daughter to do whatever was necessary to get to the top of the school just before she was about to leave for her first day at school. The mother was also a very funny character as she took on the role of a stereotype "pushy mother". She also intimidated Lindsey but in a different way to Katie. ...read more.

They also leaned eagerly towards Lindsey and whispered comments such as "don't be a baby!" and "it'll make you well cool" which was a good example of peer pressure that effects many people in everyday situations. To make it a bit more interesting we also placed one girl behind Lindsey who tried to dissuade her from passing the note. For example, she said comments such as, "don't listen to them" and "don't fool for it" do deter her. However, Lindsey's friend was not as forceful or intimidating as the others as she too wanted to get on with the test. This created a "devil" and "angel" effect which although was pretty obvious, was an interesting way to do it. When we watched it for the final time with the extra scenes added in the moment when Lindsey gave into the temptation and passed the note was much clearer and added more context to the role play. ?? ?? ?? ?? D.C.B ...read more.