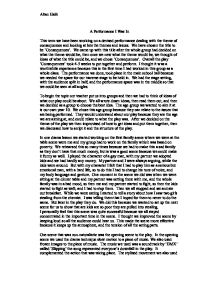 Examination of A Performance I Was In

A Performance I Was In This term we have been working on a devised performance dealing with the theme of consequences and looking at lots the themes and issues. We have chosen the title to be 'Consequences'. We came up with this title after the whole group had decided on what the theme would be, then once we new what the theme would be, we thought of ideas of what the title could be, and we chose 'Consequences'. Overall the play 'Consequences' took 4-5 weeks to put together and perform. I thought it was a worthwhile experience because this is the first time I had worked in this group as a whole class. The performance we done, took place in the main school hall because we needed the space for our traverse stage to be held in. We had the stage setting, with the audience split in half, and the performance space was in the middle so that we could be seen at all angles. To begin the topic our teacher put us into groups and then we had to think of ideas of what our play could be about. We all wrote down ideas, then read them out, and then we decided as a group to choose the best idea. ...read more.

But later in the play they do. We did this because we wanted to set up the next scene for us to show that are kids are so poor they are pulled into stealing. I personally feel that this scene was quite successful because we all stayed concentrated in the important time in the scene. I thought we improved the scene by keeping loud so all the audience could hear us. This made the scene more effective because it keeps up the atmosphere, and the tension of all the acting parts. One scene that was non-naturalistic was the opening scene to the play. In the opening scene we used the drama technique slow motion to a piece of music. We also used frozen images to the piece of music. The music we used was a soundtrack by 'DMX' called 'Slipping' the song represented everyone's downfall in the play. It complemented the action that was taking place. The stylised movement we also used was sound collage, we used the sound collage to build a atmosphere for the opening scene, by doing this we showed the audience what the play was about by revealing all the issues and gave an insight into the situation the character was in. We also used a technique called duologue so that the angel and the devil characters commented on the action. ...read more.

I feel that it could of have been more successful if we chose an outside audience, not friends. On the scenes that we could have been improved was the scene on were we linked up to our other groups together. I felt that it would have been better if we also had more time on to set the play, and if the cast was there every day, so then we could rehearse and get every thing perfect. I feel that the work that I have been doing in my lessons this term has been quite successful because it has brought the group closer to work with each other, and it is good experience for the future. I feel that the whole experience of devising the play has been very enjoyable. I feel that it was enjoyable because this is what I like in drama GCSE. I feel as a performer I gained experience in a way that it makes me feel easier now to act in front of my friends, and now I am fully concentrated and confident in performing in front of an audience. I have learnt that for my performance next year I will be able to cope with the tension and hard work. Overall it has been a productive piece of work on what we done this term, which has been enjoyable. Altan Halit ...read more.