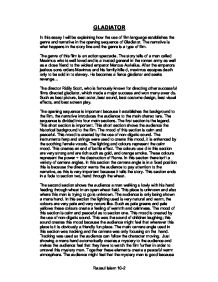 Explain how the use of film language establishes the genre and narrative in the opening sequence of Gladiator.

GLADIATOR In this essay I will be explaining how the use of film language establishes the genre and narrative in the opening sequence of Gladiator. The narrative is what happens in the story line and the genre is a type of film. The genre of this film is an action spectacle. The story tells of a man called Maximus who is well loved and is a trusted general in the roman army as well as a close friend to the wicked emperor Marcus Aurielius. After the emperors jealous sons orders Maximus and his family killed, maximus escapes death only to be sold in to slavery. He becomes a fierce gladiator and seeks revenge... The director Ridily Scott, who is famously known for directing other successful films directed gladiator, which made a major success and won many awards. Such as best picture, best actor, best sound, best costume design, best visual effects, and best screen play. The opening sequence is important because it establishes the background to the film, the narrative introduces the audience to the main characters. The sequence is divided into four main sections. The first section is the legend. This short section is important. ...read more.

The audience is only being shown a mans hand. In this section the lighting used is very natural and warm, the colours are very pale and very nature like. Such as pale greens and pale yellows these colours create a feeling of warmth and calmness. The mood of this section is calm and peaceful as to section one. This mood is created by the use of non-digetic sound. This was the sound of children laughing; this sound creates this mood because the audience might feel that wherever this place is it is obviously a friendly fun place. The main camera angle used in this section was tracking and the camera was only focusing on the hand. Tracking was used so the audience can follow the character moving. Just showing a mans hand automatically creates a mystery to the audience and makes the audience feel that they have to watch the film further in order to unravel this mystery man. Together these elements create a peaceful warm atmosphere. The audience might feel that the mystery man is good because the sound, lighting and colour all blended together to create the calmness. ...read more.

But when the camera shots are focussed on maximus the tempo slows down creating a calm peaceful atmosphere. When this happens the audience might link this sound to section two because the sounds tempo used matched. The audience might think that the man in this section could be the mystery man in section two. As the tempo progresses it gives the audience a feeling of excitement and a feeling that something is going to happen. In this section there was a lot of straight cuts used. As the editing increases the tempo increases. The instruments used in this section are very sharp and loud. Drums and brass. These instruments are normally associated with war music. The fourth and final section shows the audience the battle between the two armies. The editing in this section has changed dramatically. The director has decide to use a lot of straight cuts. These shots are very fast. The music in this section is very destructive and also very grand. The pace is much faster............. All the elements are combined to create the effect of............. The audience are likely to feel.... because...and.... I think the use of film language has been successful in establishing the genre of the film...because.... The narrative is established through the use of...and.... Razaul Islam 10-2 ...read more.