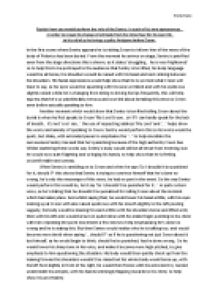 Explain how you would perform the role of the Sentry, in each of his two appearances, in order to reveal his change of attitude from his initial fear for his own life to his relief as he brings a guilty Antigone before Creon.

﻿Stella Kane Explain how you would perform the role of the Sentry, in each of his two appearances, in order to reveal his change of attitude from his initial fear for his own life to his relief as he brings a guilty Antigone before Creon. In the first scene where Sentry appears he is visiting Creon to inform him of the news of the body of Polynice has been buried. From the moment he arrives on stage, Sentry is petrified even from the stage directions this is shown, as it states ?struggling... he is very frightened? so to help this to be portrayed to the audience that Sentry is terrified, his body language would be all tense, his shoulders would be raised with his head and neck sinking between his shoulders. His facial expressions would help show that he is worried what Creon will have to say, so his eyes would be squinting with his nose wrinkled and with his eyebrows slightly raised whilst he is changing from biting to licking his lips frequently, this will help express that he?s so unbelievably nervous and worried about breaking this news to Creon even before actually speaking to him. Another moment which would show that Sentry is terrified telling Creon about the burial is when he first speaks to Creon ?My Lord Creon...sir! ...read more.

Sentry?s posture would be less apprehensive and more relaxed because the deed is done, he wouldn?t feel as up tight, so his arms, hands, shoulders and face wouldn?t be as tense, his eyes would be on Creon, making eye contact with him, much of the anguish in his face would have disappeared, so it would be more relaxed, his eyebrows would be lowered, his mouth would appear less strained, depicting more of a natural look, the tone of his voice would be lowered, and he is a little more confident and stronger which shows his sense of relief that he has broke the news to Creon. The second episode of Sentry contrasts with his first visit to Creon, he approaches him with a friendly address ?Lord Creon? rather than respecting address like before ?My Lord Creon?. This shows that Sentry is no longer petrified of Creon, he has done what he was told to do, and he is freed without conviction. To help show this Sentry would perform with a more confident attitude, the friendly approach he gives to Creon shows a slight hint of sarcasm and arrogance towards Creon because he has brought Creon?s ?criminal?. So the tone of his voice would be strong and loud, with a bold pitch showing the confidence in Sentry, he would sound calm without stuttering. ...read more.

control, so his posture again would be slouchy, his weight would be all on one side, but this time on his left to show that he?s been standing there a long time, so in a way he is getting a little bored, even though he wants to show off and tell Creon how it all happened. So he switches sides right to the left, so his left hip lifted all the weight on his left side, his right knee is bent and his right foot turned out, his right hand then is lifted from his hip at which point his left hand is placed on his left hip, his right hand slowly makes its way up to the back of his head slightly to the right and scratches it. Then he lower his arm so his elbow is bent and underneath his armpit with his right hand lifted up to his chest, with his right hand relaxed, and begins to make wringing type hand gestures whilst telling his story. This helps emphasise that Sentry?s attitude towards Creon has completely changed, he is no longer frightened of Creon as he has done a ?good job? in Creon?s eyes, he is no longer in the hands of Creon and is free to leave without being punished so compared to the timid, shaky Sentry in the first scene, he is now bold, confident and fearless of his King Creon. ...read more.