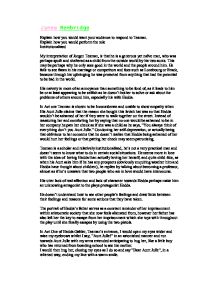 James Bembridge Explain how you would want your audience to respond to Tesman. Explain how you would perform the role Institutionalized My interpretation of Jorgen Tesman, is that he is a generous yet na�ve man, who was perhaps spoilt and sheltered as a child from the outside world by his two aunts. This may be perhaps why he only sees good in the world and the people around him. He fails to see flaws in his marriage or competitors and foes such as Lovebourg or Brack, because through his upbringing he was protected from anything that had the potential to be bad in the world. His naivety is more of an annoyance than something to be fond of, as it leads to him be or at least appearing to be selfish as he doesn't bother to solve or ask about the problems of others around him, especially his wife Hedda. In Act one Tesman is shown to be Inconsiderate and unable to show empathy when His Aunt Julle claims that the reason she bought this lavish hat was so that Hedda wouldn't be ashamed of her if they were to walk together on the street. Instead of reassuring her and comforting her by saying that no one would be ashamed to be in her company he pats her check as if she was a child as he says, "You always think of everything don't you Aunt Julle." ...read more.

This is confirmed by Hedda later. Hedda had many admirers before her marriage. This confirms that George as a rank outsider was not expected to carry off the prize. Typical of him though, he feels pride in this fact but no particular surprise himself. However, a question is set up in our minds through these hints. Why did beautiful stylish popular Hedda marry George, who anyone can see is a nice enough fellow but not handsome, dashing or lively? 2. Look at the dialogue between George and his Aunt from: MISS TESMAN `But tell me, George - haven't you any - any extra little piece of news to give me?' [Page 6] I But look here, Jorgen, haven't you anything ... anything, well, special to tell one?' [Page 2688] to MISS TESMAN `Yes, yes, dear boy. 1 was thinking of your books.' [Page 7] I `Of course, my dear boy. It was the library I was thinking of. [Wage 270.] This is a gently comic section, as Miss Tesman tries to find out whether Hedda is pregnant and George is too wrapped up in his academia even to realise what she's saying. At last, MissTesman has to give up, with a sigh, realising, with loving indulgence, how unaware George is. To acquaint themselves with the scene, have the students improvising in their own words first. ...read more.

Is he indeed like most of us in his behavior, his morality, and his moral decisions--an ordinary man who is neither better nor worse than most of us? Does his conversation with Hedda show his naivete and immaturity regarding male-female relations? Throughout this scene, Hedda warns Tesman to be quiet so that Berta won't hear; she wants to avoid scandal and to maintain her privacy. Is there anything ridiculous in Tesman's wanting to tell Berta that Hedda loves him or that she is pregnant? That prospect makes her clench "her hands together in desperation" and cry out, "Oh, it is killing me,--it is killing me, all this!" (p. 63). What is so offensive to her in Tesman, his response, and her situation? Christopher Raikes excels as the insensitive Tesman, cheerfully twirling the string on a packet of new books, and eager to 'cut the pages'. Benedict Cumberbatch plays Tesman, not as the usual naive prig, but a serious youthful scholar, just returned from a six month honeymoon and proud of his recently acquired doctorate. But his true spirit is only revealed when, in the closing moments of the play, he begins his new life's work collaborating with his natural partner, the fragile Thea Elvsted, played by Lisa Dillon with a touching air of dogged integrity as she and Tesman piece together Loevborg's lost masterpiece, the original manuscript destroyed in a fit of jealousy by Hedda.. ...read more.