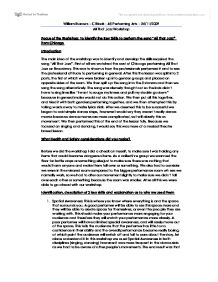 Focus of the Workshop: To identify the Key Skills to perform the song "All That Jazz" from Chicago Introduction The main idea of the workshop was to identify and develop the skills required the song "All That Jazz". First of all we watched the cast of Chicago performing All That Jazz on Broadway. This was to show us how the professionals performed it and to see the professional attitude to performing in general. After this the lesson was split into 2 parts, the first of which we were broken up into gender groups and placed on opposite sides of the room. We then split up the song into the 3 stanzas and then we sang the song alternatively. The song was cleverly thought out so the lads didn't have to sing lines like "I want to rouge my knees and pull my stockings down" because in general males would not do this action. We then put all this together, and tried it with both genders performing together, and we then attempted this by taking words away to make lyrics stick. After we deemed this to be successful we began to add simple dance steps, however I would say they weren't really dance moves because dance moves are more complicated, so I will classify this as movement. ...read more.

In this workshop we used Spatial Awareness in both disciplines (singing, dancing) however it was more frequent in the dance side as we had to be aware of other people's movements. The end result was that we all gathered a good spatial awareness as no one bumped into someone else. This meant that our performance looked really slick and the professionalism was second to none. Done really well like we did, this skill should have had the audience begging for more and in some cases even wanting to join in! 2. Timing: Timing is when we plan certain movements or certain notes at certain times, and is most common in musical theatre, as it goes hand in hand with spatial awareness and the dance side to this workshop. A good performer will have good timing and in some cases may be able to change the timing slightly to show originality. This should add to a professional approach and therefore the performance will be even more professional. An awful performance timing wise will mean, certainly in musical theatre that we lose some of the focus towards the other aspects whilst trying to rectify the timing issue, then the whole performance becomes unprofessional and it will look shoddy. ...read more.

Therefore they will not be able to follow the drama/ musical theatre piece as closely and then they will just switch off and pay no attention, meaning you lose self esteem and confidence in your acting ability. We mostly used diction is in the singing part of the workshop, and was really important as the song is a wordy song. At first we really struggled because the timing was difficult and therefore the diction was difficult was hard to achieve, also this diction should have been set for an American, as we were in Chicago. As we progressed and did the song over and over we got better at this as we worked at it in stages to make sure it was all achievable. Personal Areas for Development In the workshop, I uncovered several strengths and ways I could improve my drama/musical theatre skills. These were: Strengths * Good general timing in the song. * Good memorising of the lyrics. * Good vocal quality. Improvement areas * Become more spatially aware. * Become more confident in my individual ability. * Keep focused throughout. ?? ?? ?? ?? William Burrows - C Block - AS Performing Arts - 24/11/2009 All That Jazz Workshop ...read more.