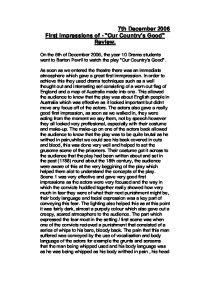 7th December 2006 First Impressions of - "Our Country's Good" Review. On the 6th of December 2006, the year 10 Drama students went to Barton Pevril to watch the play "Our Country's Good". As soon as we entered the theatre there was an immediate atmosphere which gave a great first immpression. In order to achieve this they used drama techniques such as a well thought out and interesting set consisting of a worn out flag of England and a map of Australia made into one. This allowed the audience to know that the play was about English people in Australia which was effective as it looked important but didnt move any focus off of the actors. The actors also gave a really good first impression, as soon as we walked in, they were acting from the moment we say them, not by speech however they all looked very proffesional, especially with their costume and make-up. The make-up on one of the actors back allowed the audience to know that the play was to be quite brutal as he writhed in pain,whilst we could see his back covered in cuts and blood, this was done very well and helped to set the grusome scene of the prisoners. Their costume got it across to the audience that the play had been written about and set in the past (1788) round about the 18th century, the audience were aware of this at the very beggining of the play which helped them alot to understand the concepts of the play. ...read more.

Each character was very different aswell showing that he can play a range of roles not just one. The girl who played the part of Liz was also a very good actress as she used her body language and voice to make her character really seem grotty and as vile as she possibly could, she really got accross the status of that particular character and enabled the audience to feel empathy with her when she describes in Act two scene one when she tells the other convicts her story of how she was arrested and what for. The actor who played the part of Harry was very good however he needed to be clearer when he acted out being possesed by Handy Baker as it was hard for the audience to know whether he was talking as Handy Baker or Harry, for this to be clearer he should have changed his voice more when talking as Handy baker and left more of a pause after each line from a different character even though he did not do this completely successfully i still think he tried hard however he did not show that he was really in depth with his role. The girl that played Duckling i felt was not as much of a strong actress as the others were, as she was not very enthusiastic as it seemed she was not performing with a passion for her role, it seemed as though her character didnt come across as much as others such as Liz and Dabby who did seem to give it there all. ...read more.

The importance of the scene in which all of the majors, captains and vicors were talking about putting on a play using the convicts as the cast , was lost as the scene was too naturalistic and the main focus was supposed to be how the theatre might change the civilliasation of the convicts but instead the focus was all over the place , sometimes being on the man looking at the stars and sometimes people having drinks etc. If they were to perform this play again they should make this scene of more importance and make it less naturalistic so that the focus is on the redemptive power of the theatre. Also the jewish character that wished to be a writer, Wisehammer, The scene in which he offers his prologue to Ralph had lost importance in their interpretation of it. When Wisehammer reads out his prologue it should be of alot of importance to the audience and it should be a real remembered moment in the play and in this version of Our Country's Good the importance of this was also lost. All focus should have been put on to Wisehammer at this particular moment instead there was too much going on on the stage. They did interpret some things right like the emotions of each character and the relationships and chemistry between charaters. Overall, i think the production of Our Country's Good was performed very well by the students of Barton Pevril - it had very convincing production values. The actors were very talented. Out of 10 i would give this performance a 7. ...read more.