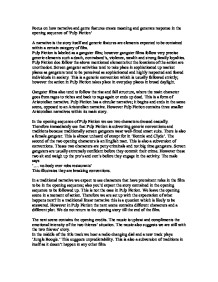 Focus on how narrative and genre features create meaning and generate response in the opening sequence of 'Pulp Fiction' A narrative is the story itself and generic features are elements expected to be contained within a certain category of film. Pulp Fiction is labeled as a gangster film; however gangster films follow very precise generic elements such a death, contraband's, violence, wealth and strong family loyalties. Pulp Fiction doe follow the above mentioned elements but the locations of the action are unorthodox. Screen gangster activities tend to take place in sophisticated up market places as gangsters tend to be perceived as sophisticated and highly respected and feared individuals in society. This is a generic convention which is usually followed strictly; however the action in Pulp Fiction takes place in everyday places in broad daylight. Gangster films also tend to follow the rise and fall structure, where the main character goes from rages to riches and back to rags again or ends up dead. This is a form of Aristotelian narrative. ...read more.

The music also suggests we are still with the two thieves' story. In the middle of the title track we hear a radio changing dial and a new track plays 'Jungle Boogie.' This suggests unpredictability. This is also a subversion of traditions in itself as it doesn't happen in any other film. We enter the next scene mid-way into a conversation. We do not know of they're related to the couple in the restaurant. A whole new narrative has been introduced and conventionally we do not expect that. In a traditional narrative these characters and what they're talking about would have been made clear when they were introduced. However in Pulp Fiction it is not clear; all that is made apparent is that one of the characters has been to Amstedam. Traditionally all dialogue should advance the plot. However the characters conversation does not advance the plot in anyway; it gives minute details about one of the characters. The characters are dressed in suits. Traditionally dressed like screen gangsters in black suits and ties with white shirts. ...read more.

This emphasizes the brutality of what they do. These college kids are no match for gangsters. This puts distance between the audience and Jools and Vincent, as the audience sees it as unnecessary violence. It also highlights the essentially evil nature of the characters. A lot of intimidation is used by Jools in this scene, particularly intimidation by sarcasm. For example '... can I have a bite of your burger?' '...may I wash it down with a drop of your tasty sprite?' These are both rhetorical questions which are not ment to be answered. By asking such questions Jools is demeaning the college kids and giving himself a great sense of self importance. Before Vincent and Jools shoot Brett, Jools gives a theatrical performance of a passage of the bible. This appears to give Jools a sense of self importance. This subverts generic conventions. It's unusual for a character to turn a murder into a theatrical performance. In the next scene this narrative is left behind and a new one unfolds. To conclude Pulp Fiction is one of a kind. It tends to break all the conventions set in place for a traditional gangster film, however it does it successfully and with style. ...read more.