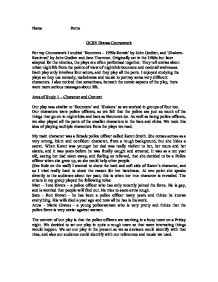 Name Form GCSE Drama Coursework For my Coursework I studied 'Bouncers - 1990s Remix' by John Godber, and 'Shakers-Restirred' by John Godber and Jane Thornton. Originally set in the 1980s but later adapted for the nineties, the plays are often performed together. They tell stories about urban nightlife from the points of view of nightclub bouncers and cocktail waitresses. Each play only involves four actors, and they play all the parts. I enjoyed studying the plays as they use comedy, melodrama and music to portray some very different characters. I also noticed that sometimes, beneath the comic aspects of the play, there were more serious messages about life. Area of Study 1 - Character and Context Our play was similar to 'Bouncers' and 'Shakers' as we worked in groups of four too. Our characters were police officers, as we felt that the police see just as much of the things that go on in nightclubs and bars as Bouncers do. As well as being police officers, we also played all the parts of the smaller characters in the bars and clubs. We took this idea of playing multiple characters from the plays we read. ...read more.

Big fight 10. My monologue about my past 11. Final scene The plot was quite easy to come up with as we tried to tell stories about urban nightlife, as a mixture of the funny and the serious. We all made up our own monologues to tell our characters stories. The order of events is not chronological, but quite random and abstract. We intended not to tell a straight forward story, not to give a general overview of modern nightlife. Area of Study 3 -Audience We thought a lot about who our target audience should be. At first we discussed Theatre-in Education, and how our play could be used to show teenagers the dangers in nightlife if they were not careful. However we felt that a lot of the issues we raised may make our play unsuitable for school students. We decided that the purpose of our play was to entertain an older audience, who would identify with the themes and characters. We also wanted to make serious points about the work of the police, and the problems that could be going on in people's lives that we know nothing about. ...read more.

Body language was also a sign during our play. We also used Proxemics; when a character was sat on the chair in the spotlight, the light represented truth. Sitting in the chair was the only place where characters were truly honest; that's why all four monologues happened there. My role: In the planning and performing of this play, I think I took on aspects of all four roles: deviser, designer, director and performer. We all devised and planned ideas together. I think Sam and I had most of the original ideas, but the others all helped, and we all came up with our own ideas for monologues. We all had different ideas with regard to designing and I feel that although we succeeded her to some extent, we could have tried harder with our set. We all directed each other and I feel this worked well, but sometimes it might have been easier if just one of us took on that role, as we had a few disagreements. My role as a performer was the main role I played. My intention was to create a range of humours, identifiable and sympathetic characters. I feel I succeeded really well, but if I had had more time I would have developed my main role as Karen even further to be even more realistic. ...read more.