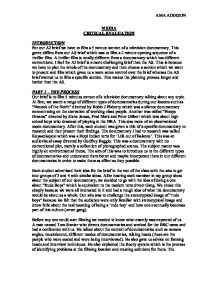 For our A2 brief we have to film a 5 minute section of a television documentary. we decided to go with the idea of doing a one about Rude Boys which is equivalent to the modern term Street Gang.

MEDIA CRITICAL EVALUATION INTRODUCTION For our A2 brief we have to film a 5 minute section of a television documentary. This genre differs from our AS brief which was to film a 2 minute opening sequence of a thriller film. A thriller film is totally different from a documentary which has different conventions. I feel the A2 brief is a more challenging brief than the AS. This is because we have to plan the whole of the documentary and then choose a section which we want to present and film which gives us a more sense control over the brief whereas the AS brief wanted us to film a specific section. This makes the planning process longer and harder than the AS. PART 1 - THE PROCESS Our brief is to film 5 minutes extract of a television documentary talking about any topic. At first, we watch a range of different types of documentaries during our lessons such as "Nanook of the North" directed by Robin J Flaherty which was a silence documentary concentrating on the starvation of working class people. Another was called "Hoops Dreams" directed by Steve James, Fred Mark and Peter Gilbert which was about high school boys who dreamed of playing in the NBA. This was more of an observational mode documentary. After this, each student was given a title of a specific documentary to research and then present their findings. The documentary I had to research was called Koyaanisqatsi which was a Hopi Indian term for 'Life out of Balance'. This was an audiovisual essay directed by Godfrey Reggio. This was a documentary with no conventional plot, merely a collection of photographed scenes. The subject matter was highly an environmental theme. The aim of this was to introduce us to the different types of documentaries and understand them better and maybe incorporate them in our different documentaries in order to make them as effect as they possible. ...read more.

Kyle our main character was terribly unreliable and as a result, we had to do the editing of our documentary in parallel with the filming. Whenever we planed dates to take shots of him (Kyle), he sometimes would not show up, and with time not on our side, we had to edit and at the same time, film the remaining shots for our documentary. The editing process was just as difficult as the filming stage. Whilst working through our documentary we felt that it lacked cut-aways because the duration of both interviews was too long and the audience would lose concentration. We felt that we needed more cut-aways because this would make the interviews more effective and would constantly remind the audience what the subject matter of our documentary was. The visuals would enhance the audience's understanding whilst hearing the interviewee talking about the subject matter. I took on the initiative of operation manager and kept calling Kyle to make sure that he was available when we needed him. However promises were sometimes broken and he was not around when we needed to take shots of him which resulted to us not having enough cut-aways. We felt that we needed footage of random look-a-like 'rude boys' of today and decided take shots of boys who looked and fitted the 'rude boy' image. We had footage of Kyle's year 11 class photo and noticed that this was not as clear as it could be and therefore took re-shots of the photo. We wanted to use some archive footage at the start of the documentary and use some statistical facts about rude boys of today. Both of these proved hard to find and considering the time space we had till the documentary's due date, it was impossible to find anything and therefore had to eliminate this idea. The radio sound-a-like audio extract that I found on the internet and planned to use was also eliminated. ...read more.

How could we improve the filming and editing? 3. Do you agree with our Target audience from 13 -19 years of age? 4. What kind of documentary do you think it is? 5. Do you agree with our decision to sell it on Channel 4? 6. Does the topic interest you? 7. Other comments We found that the audience was particularly interested in the topic and found the documentary informative as a whole. It also showed that we successfully achieved our aim of making our documentary's mode Expository. However there were other complaints such as the length of the interviews and limited use of cut-aways but this was because we ran out of time. These are some of the quotes we got from our audience after viewing our documentary. * ' I think the subject and especially Kyle's view were most interesting ' * ' It was more informative ' * ' both interviews were great ' * ' the texts were a bit too fast ' * ' some areas are a bit too shaky ' * ' ends too suddenly ' We took the audience's views on boards and made some improvements. Some of the audiences said that the documentary ended too suddenly. We corrected the problem by ending the documentary with a question. We figured that this would give the audience the intention that an answer would be given to the question afterwards. This would showed the audience that they only viewed the beginning of the whole documentary and the question was about to be answered afterwards. Through this feedback, we also found that audience felt that the camera was too shaky at some point which made them feel uncomfortable. Because of the confusion the audience had, we decided to cut out the shaky parts which helped the documentary flow more smoothly. We then also extended the length of some of the screen texts to give the audience enough time to read through it. ?? ?? ?? ?? AMA ADDISON ...read more.