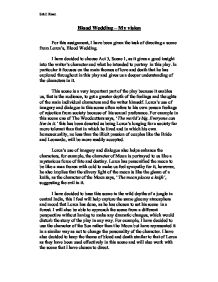 For this assignment, I have been given the task of directing a scene from Lorca's, Blood Wedding.

Blood Wedding - My vision For this assignment, I have been given the task of directing a scene from Lorca's, Blood Wedding. I have decided to choose Act 3, Scene 1, as it gives a good insight into the writer's character and what he intended to portray in this play. In particular it focuses on the main themes of love and death that he has explored throughout in this play and gives us a deeper understanding of the characters in it. This scene is a very important part of the play because it enables us, that is the audience, to get a greater depth of the feelings and thoughts of the main individual characters and the writer himself. Lorca's use of imagery and dialogue in this scene often refers to his own person feelings of rejection from society because of his sexual preference. For example in this scene one of The Woodcutters says, 'The world's big. Everyone can live in it.' this has been denoted as being Lorca's longing for a society far more tolerant than that in which he lived and in which his own homosexuality, no less than the illicit passion of couples like the Bride and Leonardo, will be more readily accepted. Lorca's use of imagery and dialogue also helps enhance the characters, for example, the character of Moon is portrayed to us like a mysterious force of fate and destiny. ...read more.

She is a very evil woman and nothing appears to stop her. The Bridegroom has been changed to The Bandit, his objective is to seek revenge on the man who killed his family and took away his wife to be. He appears to be a man in rage, 'rage star', nothing will stop him from finding Leonardo and The Bride so when the Gypsy fortune-teller tells him to join forces with in the hunt he follows without hesitation. Leonardo and The Bride I have decided to keep the same, however, there are implications that suggest that Leonardo maybe representing the writer's character this is why I have chosen to call my character of Leonardo, Lorca. I have notice that all the other characters have not been given proper names apart from this one and feel it maybe significant that Leonardo and Lorca both start with the letter 'L'. Lorca is quite a determined person and always wants to get what he wants. In this case, the Bride and Quotes like' they are close behind us and I'm taking you with me', back up sentiment. Lorca is also a very masculine man, he has become insane through the love he has for The Bride and has in away become evil and does not think or feel for anyone else but The Bride. ...read more.