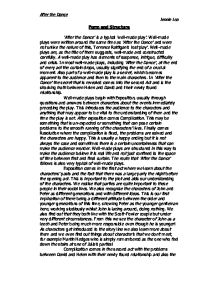 Form and structure - 'After the Dance'

As characters get introduced to the story line we also learn more about them and we even find out things about character's that we don't meet, for example Martin Hedges who is simply remembered as the one who feel down the stairs at one of Julia's parties! Complication comes in the second act with the problems between David and Helen with their newly found relationship and also the cliffhanger of Joan's death. However these are somewhat connected. When Joan finds out about David and Helen she is upset, we can see this in Act two, scene one when Joan breaks down on John's shoulder after hearing the news of the affair from Helen herself. The complication of David and Helen is also the well-made play's secret in 'After the Dance'. It seems that not everyone knows about it, just a select few, including the couple and John. Peter and Joan do not know before it is revealed and it seems to affect them the most. ...read more.

With Joan being an essential character in the play it seems illogical to kill her off in the middle of it but maybe Terrence Rattigan had a reason for this. It does allow the audience to see what life is like for the other major characters without her. After the play, while considering different endings and possible passages through the remaining characters lives, we are left with questions to ask. Why does Joan's death come in Act two? Possibly it can be written like this to show the audience the impact it has in the Mayfair flat, however it is also just a complication in this 'well-made play'. Act three also leaves us with questions about what is going to happen after the play to John and whether he will stick at his new job, others about David and Helen's relationship and whether David feels too much remorse about Joan to stay with the younger model! And what will happen to Peter and his 'new harder image'? The most significant question though will be about David and drinking due to the final cliffhanger of him reaching for the bottle, yet again. After the Dance Jennie Lea ...read more.