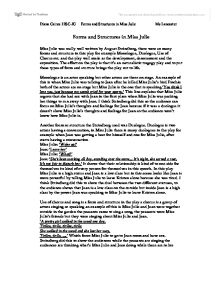 Form and Structure of Miss Julie

Forms and Structures in Miss Julie Miss Julie was really well written by August Strindberg, there were so many forms and structure in this play for example Monologue, Duologue, Use of Chorus etc. and the play well made as the development, denouement and the exposition. The effect on the play is that it's an naturalistic tragegy play and to put these types of form and sturture brings the play out to life. Monologue is an actor speaking but other actors are there on stage. An example of this is when Miss Julie was talking to Jean after he killed Miss Julie's bird Finchie both of the actors are on stage but Miss Julie is the one that is speaking 'You think I love you, just because my womb cried for your sperm.' This line explains that Miss Julie regrets that she had sex with Jean in the first place when Miss Julie was packing her things to run away with Jean. I think Strindberg did this so the audience can focus on Miss Julie's thoughts and feelings for Jean because if it was a duologue it doesn't show Miss Julie's thoughts and feelings for Jean so the audience won't know how Miss Julie is. ...read more.

The effect of the play in performance is if there is a break in between the play it wouldn't be emotionally and realistic as it would be if the play was continuous. In my drama practical class I work on forms and structures of the play using Miss Julie's Monologue 'You think I can't bear the sight of blood? That I'm so weak ... oh, if only ... your blood, your brains on a block.' First we did the monologue as with only one person saying the words Strindberg version then I went into a group of three and experiment the version with different form and structure each of us in my group read some parts individually or together using different techniques such as echoing etc. to see the effect. In my opinion the one that my group did show that Miss Julie is one person but shown in three different ways whereas the original Strindberg technique it shows more emotion while the group performance didn't that much, I think Strindberg's version is more powerful depends how you say the monologue ?? ?? ?? ?? Diana Caires 12SC-JG Forms and Structures in Miss Julie Ms Lancaster ...read more.