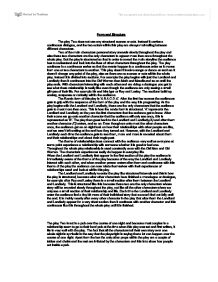 Form and Structure of 'Two'

Form and Structure The play Two does not use any structural scenes or acts. Instead it carries a continuous dialogue, and the two actors within this play are always muti-rolling between different characters. Two of the main characters personal story unravels slowly throughout the play and also these two characters are the only characters to appear more than once throughout the whole play. But the play is structured so that in order to reveal the main storyline the audience has to understand and look into the lives of other characters throughout the play. The play continues in a continuous series so that the events happen in a continuous order as it moves from one or two characters to another. This play doesn't involve songs or dance as such so it doesn't change any point of the play, also as there are no scenes or acts within the whole play. Instead it is divided into sections. For example the play begins with just the Landlord and Landlady then it continuous into the Old Woman then Moth and Maudie and so on until the play ends. ...read more.

Each time the Landlord and Landlady enter the audience find a tiny bit more of their individual story that we won't find out fully until the end. It is mainly nearly after every other character in the play that after them the Landlord and Landlady appear for a very short section then it continues with another character and this continuous like this throughout the whole play until it is finished. The play Two is set in a pub over the course of one night and because most couples in a relationship seem to go to their local pub at the time when this play was set and first written, it fits in very well with the play. The fact that all the characters tell their own story over one whole night is symbolic in the way that the playwright is saying that a lot can happen over the course of one night. Apart from the bar the only other props within the play are a couple of tables and chairs and the rest are imitated by the characters and this is to show how people act inside a pub. ...read more.

Landlady: Get off. Landlord: No. Landlady: Get off or I'll scream like I've been stabbed. Landlord: Do it then....He doesn't even look at her. He just leaves. This is one of the many small sections between the Landlord and Landlady that increase the tension between them both for the finale of the play. Landlady: Because seven years ago tonight our son died... The play is a success overall and the way the sections are structured and how the characters are used make this happen. The fact that these relationships happen all the time and because the play is set in a pub makes it really easy for the audience to relate to. The play looks at all different ranges of emotions and what type of good and bad relationships there are, from Roy and Lesley that clearly show that they have a bad relationship to Fred and Alice that show they have one of the best relationships throughout the whole play. I don't think this play would have been as successful if it was structured into acts and scenes, and because it has used a continuous series instead it keeps the audience watching and interested as it wouldn't as much if the play was structured into acts and scenes. ...read more.