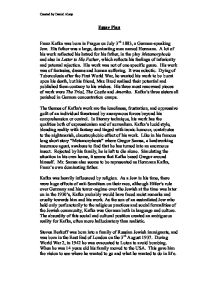 Franz Kafka was born in Prague on July 3rd 1883, a German-speaking Jew.

Essay Plan Franz Kafka was born in Prague on July 3rd 1883, a German-speaking Jew. His father was a large, dominating man named Hermann. A lot of his work reflected his hatred for his father, in the play Metamorphosis and also in Letter to His Father, which reflects his feelings of inferiority and paternal rejection. His work was not of one specific genre. His work was of fantasies, dreams and human suffering. It was eclectic. Dying of Tuberculosis after the First World War, he wanted his work to be burnt upon his death, but his friend, Max Brod realised their potential and published them contrary to his wishes. His three most renowned pieces of work were The Trial, The Castle and Amerika. Kafka's three sisters all perished in German concentration camps. The themes of Kafka's work are the loneliness, frustration, and oppressive guilt of an individual threatened by anonymous forces beyond his comprehension or control. ...read more.

The absurdity of this social and cultural position created an ambiguous reality for Kafka, often more hallucinatory than realistic. Steven Berkoff was born into a family of Russian Jewish immigrants, and was born in the East End of London on the 3rd August 1937. During World War 2, in 1942 he was evacuated to Luton to avoid bombing. When he was 14 years old his family moved to the USA. This gave him the vision to see where he wanted to go and what he wanted to do in life. Moving back to Britain, he finished school, saved up enough money and went to France at the age of 19 to study the art of mime. Upon returning to London in 1968 he formed the London Theatre Group. It was in 1969 that Berkoff remade Kafka's Metamorphosis. In 1976 he married his second (and present) wife, Shelley Lee. ...read more.

He also starred in many movies such as A Clockwork Orange and Rambo. He usually played the villain, but the main reason for his film roles was to fund his theatre productions. Berkoff was an atheist, explaining his wish to attract people of all social masses to see his plays. He never uses religious effects in his plays to avoid any conflict of cultures. Brecht was an influence of Berkoff. Brecht didn't want to get involved with an audience. Another influence was Peter Brook, an expert of slapstick. Stanislavski believed in naturalism, the opposite of Brecht, and yet Berkoff used elements from both Brecht and Stanislavski in his work. This is shown in Metamorphosis, as without the audience's sympathies for Gregor, the play would not work. Antonin Artauds was another influence. He was involved in theatre of the absurd. Again, Berkoff uses these ideas, mainly to shock the audience in his productions. Created by Daniel Alsop ...read more.