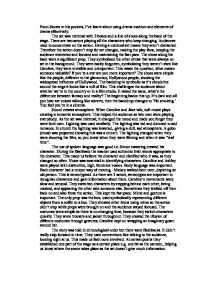 From Stones in his pockets, I've learnt about using drama medium and elements of drama effectively.

From Stones in his pockets, I've learnt about using drama medium and elements of drama effectively. The set was minimal with 2 boxes and a line of shoes along the back of the stage. There are two actors playing all the characters who keep changing. Audiences need to concentrate on the action. Having a minimal set means they aren't distracted. Therefore the action doesn't stop for set changes, making the play flow, keeping the audience interested and focused and maintaining the fast pace. The shoes along the back were a significant prop. They symbolised the other extras that were always on set in the background. They were easily forgotten, symbolising they weren't stars like Caroline, they were invisible and unimportant. This raises the question, what makes someone valuable? If you're a star are you more important? The shoes were simple like the people, different to the glamorous, Hollywood people, showing the widespread influence of Hollywood. The backdrop is symbolic as it's clouds but around the edge it looks like a roll of film. This challenges the audience about whether we're in the country or in a film studio. ...read more.

Body language was important. Each character had a unique way of moving. Mickey walked bent over, depicting an old person. This is stereotypical. As there are 2 actors, stereotypes are important to recognise characters and gain information about them. Caroline's movements were slow and sensual. They switched characters by stepping behind each other, being masked, and appearing the other side someone else. Sometimes they walked off then back on and also froze the action. This kept the fast pace. Mime and gesture is important. The only prop was the box, used symbolically representing different objects from a coffin to a bus. They showed other items using mime so the action didn't stop while props were brought on and the audience stayed focused. The costumes were simple as there is no changing time, because they switch characters quickly. They wore trousers and jacket throughout. They created the illusion of different costumes through gestures; Caroline kept on wrapping an imaginary gown around her. The story was told in chronological order but there were flashbacks. It didn't really skip forward in time. They used conventions like talking to the audience, looking right at us. ...read more.

The play raises social and cultural issues. It's about the loss of a way of life. Sean thought he'd be a farmer but now the film industry has taken over and things won't be the same, because someone has died and the farming way of life is disappearing. Sean committed suicide because he lost face in front of the whole pub when he was thrown out and there everyone is related or knows each other. He lost his sense of value. Caroline got a front row seat at Sean's funeral and she didn't even know him. Hollywood made it a superficial, shallow, publicity stunt. Charlie tried to commit suicide because he lost his livelihood of running a video store when the Blockbuster chains invaded. He lost his way of life and felt worthless. Multinational things take over having the power to make people feel like nothing/extras in their community. This raises what and who is real and what isn't. After seeing it we saw the script in class and it didn't mention there were only two actors, you'd have thought there were lots more. I thought there'd be direction on where to switch but there isn't, which creates respect for the ability of the actors. By Dawn Grant 11S ...read more.