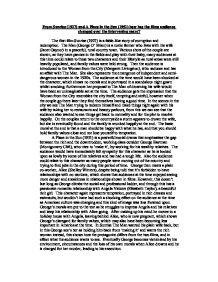 From Sunrise (1927) and A Place in the Sun (1951) how has the films audience changed over the intervening years?

From Sunrise (1927) and A Place in the Sun (1951) how has the films audience changed over the intervening years? The first film Sunrise (1927) is a fable-like story of corruption and redemption. The Man (George O' Brien) is a rustic farmer who lives with his wife (Janet Gaynor) in a peaceful, rural country town. Various shots of the couple are shown, as they have picnics in the fields and play with their baby, many audiences at this time could relate to these two characters and their lifestyle as rural areas were still heavily populated, and family values were held strong. Then the audience is introduced to the Woman from the City (Margaret Livingston), who seduces and has an affair with The Man. She also represents the emergence of independent and semi-dangerous women in the 1920s. The audience at the time would have been shocked at the character, which shows no morals and is portrayed in a scandalous night gown whilst smoking; furthermore her proposal to The Man of drowning his wife would have been an unimaginable act at the time. ...read more.

A Place in the Sun (1951) is a powerful social drama that emphasizes the gap between the rich and the downtrodden, working class outsider George Eastman (Montgomery Clift), who tries to 'make it', by working for his wealthy relatives. The audience would have immediately felt sympathy for this character as he is looked upon as lowly by some of his relatives and has had a tough life. Also the audience could relate to this character as many people were moving out of the country and trying to find jobs in the city during this period of time. George then meets a plain co-worker, Alice (Shelley Winters), despite being told that it's forbidden to have relationships with co-workers, which shows that audiences at the time enjoyed seeing more danger and sneakiness in relationships shown in films. However, this doesn't last long as George climbs the social and professional ladder, and through this has a passionate romantic relationship with Angela Vickers (Elizabeth Taylor), a beautiful rich girl. ...read more.

Eventually George becomes victimized by his environment, circumstances and the loss of his own morals when Alice drowns and he is charged for her murder, leading to his execution. By looking at the themes presented in both films we can see how the audience has changed. In Sunrise we see The Man trying to redeem himself and restore order to his relationship and the plot, which resolves happily at the end, showing that this is most likely what the audience wanted to see. However, in A Place in the Sun its evident that the audience is less inclined to see a story that ends happily, but would rather like to see George Eastman suffer as he tries to have a relationship, and eventually crash and burn. This shows a significant shift in the mood of films that people wanted to see at this time, certain values like family and marriage were shown as being disregarded in an attempt to have a richer lifestyle, which could reflect the mood of society at the time. ...read more.