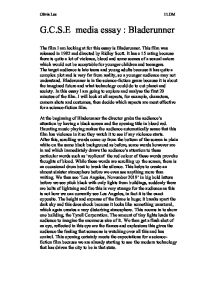 The film I am looking at for this essay is Bladerunner. This film was released in 1982 and directed by Ridley Scott. It has a 15 rating because there is quite a lot of violence, blood and some scenes of a sexual nature which would not be acceptable for younger children and teenagers.

The target audience is late teens and young adults because it has quite a complex plot and is very far from reality, so a younger audience may not understand. Bladerunner is in the science-fiction genre because it is about the imagined future and what technology could do to out planet and society. In this essay I am going to explore and analyse the first 20 minutes of the film. I will look at all aspects, for example, characters, camera shots and costumes, then decide which aspects are most effective for a science-fiction film.

At the beginning of Bladerunner the director grabs the audience’s attention by having a black screen and the opening title in blood red. Haunting music playing makes the audience automatically sense that this film has violence in it so they watch it to see if any violence starts.

After this, scrolling words come up from the bottom of the screen in plain white on the same black background as before, some words however are in red which immediately draws the audience’s attention to these particular words such as ‘replicant’ the red colour of these words provoke thoughts of blood. While these words are scrolling up the screen, there is an occasional drum beat to break the silence. This helps to create an almost sinister atmosphere before we even see anything more than writing. We then see ‘Los Angeles, November 2019’ in big bold letters before we see pitch black with only lights from buildings, suddenly there are bolts of lightning and fire this is very strange for the audience as this is not how we can currently see Los Angeles, in fact it is the exact opposite. The height and expanse of the flame is huge; it breaks apart the dark sky and this does shock because it looks like something unnatural, which again creates a very disturbing atmosphere. This zooms in to show one building, the Tyrell Corporation. The amount of tiny lights leads the audience to imagine the enormous size of it. We then get a flash shot of an eye, reflected in this eye are the flames and explosions this gives the audience the feeling that someone is watching over all this and has control. This opening certainly meets the expectations for a science-fiction film because we are already starting to see the modern technology that has driven the city to be in that state.

The first characters the audience meet in Bladerunner are Holden and Leon. Holden is dressed in a 1940’s style brown suit. This makes him appear superior in comparison to Leon who is dressed in a blue, prison style jump suit with an identity number on it. This gives the audience an immediate impression that Leon is a bad person or else he wouldn’t be in prison. Leon shows the audience that the place is not meant to be comfortable for him as he looks very uneasy and rigid as he sits down where as Holden is in his comfort zone because he relaxes into his chair smoking a cigarette as though he lives there. The room is obviously not meant for comfort, there is so much machinery it almost looks like a workshop except with a huge table and chairs.

The audience then meet Deckert, he looks like a normal man until we hear him talking, though it is his voice it is non-diegetic. This gives the audience the impression that they may be able to hear his thoughts. One part of this voice over says ‘ex cop, ex bladerunner, ex killer’ this quickly turns our thoughts of him from a standard person to wondering if he is a murderer.  The overall impression of Deckert is that of a very to the point man who can easily explain himself as a killer without remorse. This makes the audience feel rather uneasy that a person can take lives without a bad conscience. All the characters give the impression that they are from around 1940 but they are set in this futuristic city which can maker the audience feel unsettled.

There is a variety of sound in Bladerunner. The music is not upbeat, it is only just music, and the music is a random drum beat which breaks apart the silence that would otherwise be in place. This helps to create a menacing atmosphere as the tone is ominous and the pace is constantly increasing which creates tension between the beats.

Diegetic sound is sound that the characters can hear. In Bladerunner the diegetic sound helps to create the scene for where it is set, for example, the sound of rain and the announcement that ‘a new life awaits for you in the off-world colonies’ this makes the viewers aware off the fact that this is a futuristic film because, as far as we know, there are no off-world colonies at present.

The camera angles at the beginning off Bladerunner help to create a mysterious and sinister atmosphere such as when we view Los Angeles we get flick shots of an eye. These shots make the audience anticipate when it is next going to happen. This suggests that the director is trying to make the viewers feel unsure as they cannot guess when the next flick shot will be. The director uses a variety of shots, such as going from an extreme long shot to an extreme close up, this sudden change speeds up the pace and stops the audience getting bored.

The lighting reflects what the sound and camera shots are trying to do and that is to create an eerie atmosphere for all those watching. It works well with the sound as the loud drum beat is quite a dark sound and the lighting is also very dark. Although there is light when we view Los Angeles it is not ‘good light’. It is light from fire and explosions, and although throughout the film we see lots of shots of the city we never once see sunlight which makes the audience wonder if the city has fallen into an eternal night. This is alarming as we are used to the sun coming up every morning and would feel most out of place without it.

I personally find Bladerunner has a very effective film opening as it really grabbed my attention. It fits well with a science-fiction genre because it is about the future and does show me what the technology is doing to our planet and our society. It suits its target audience because even the first 20 minutes would be hard to digest and understand for a younger person and the rest of the film would be even harder. The section that most interested me was the view of Los Angeles city as it really makes you wonder why it is like that and it drew me in and made me want to watch it more. In conclusion I believe that the first 20 minutes of Bladerunner were very effective for a science fiction film.