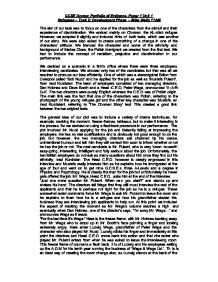 GCSE Drama: Portfolio of Evidence. Paper 1 Unit 1 Refugees - Task 2: Development Phase - Mike Wells 11AM The aim of our task was to focus on one of the characters from the stimuli and their experience of discrimination. We worked mainly on Choman, the Kurdish refugee. However, we adapted it slightly and included hints of both texts, which was another of our aims. We were also asked to create something of a change in one of the characters' attitude. We blended the character and some of the ethnicity and background of Marisa Cloze, the Polish immigrant we created from the first text. We had to include the concept of racialism, prejudice and discrimination in our performance. We decided on a scenario in a firm's office where there were three employers interviewing candidates. We showed only two of the candidates but that was all we required to produce our idea efficiently. One of which was a stereotypical Briton from Liverpool called 'Bob Nudd' and he applied for the job as well as 'Mustafa Pulami', from Iraqi Kurdistan. The team of employers consisted of two managing directors, Dan Holmes and Dave Booth and a Head-C.E.O, Peter Waga, pronounced 'V-A-R-G-A'. The two directors were purely English whereas the C.E.O was of Polish origin. ...read more.

This is an ideal way of creating the room change also, as Ludwig stands at the back of the stage and instructs each of his employees to move tables or chairs in different places to prepare for the A.G.M. This allows a scene change and also a reasonably good indication to whom Ludwig Waga is and his status. The fact that all of his employees called him 'Wagga' and his reply was always, "For the last time it's Waga!" This allows the audience to relate to the past and present element and realize exactly what is going on. Mr. L. Waga then went on to describe how happy he was that the company was doing so well and that how he wishes to maintain the moral and ideal of the company etc. The change of character in our plot was how Mr. P. Waga changed considerably because initially in the play, he was well spoken and very respectful and obviously highly intelligent. He lost his temper however and began to shout and lose all composure and patience with his fellow employees. This is because of strong racism and discrimination as the two British interviewers attempted to cheat him out of the job because he was a refugee, as was Peter Waga, which they were unaware of. ...read more.

(Gasps of amazement from the audience followed by a short round of applause, followed by L. Waga clenching his fist and pushing his elbow against the top of the desk) Not only do I thank you, but I praise each and every one of you for your essential accuracy, team work, input to the company, and mainly your truly fantastic optimism. (Faint cheer from all of the audience and a series of claps throughout next speech as Waga stands up and holds his clenched fist clearly in the air.) All I have left to say is I hope to maintain and to a certain degree, improve and progress on the moral and ideal there is at this high flying company for the next decade, (large cheers abruptly stopped by Waga's outspread hand indicating silence,) and for many more years after that! (Audience all jump to their feet with fists clenched in triumph and pride followed by an enormous cheer which goes on for about ten seconds. Exit all actors.) This was definitely the most effective part of the script. We wanted our audience to feel like part of the meeting and feel the same triumph and pride that the employees did and the way the scene was set out enabled them to do this as much as physically possible. The high emotions that we produced via his speech were very good and we succeeded in what we were trying to achieve. ...read more.