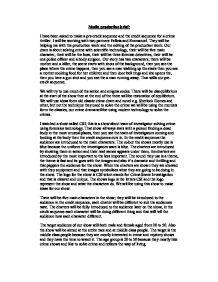 Have been asked to make a pre-credit sequence and the credit sequence for a crime thriller. I will be working with two partners Fellcia and Emmanuel. They will be helping me with the production work

Media production brief: I have been asked to make a pre-credit sequence and the credit sequence for a crime thriller. I will be working with two partners Fellcia and Emmanuel. They will be helping me with the production work and the editing of the production work. Our dram is about solving crime with scientific technology, their will be five main character, their will be the boss, their will be three forensic detectives, their will be one police officer and a body surgeon. Our story has two characters; there will be mother and a killer, the scene starts with shots of the background, then you see the place where the crime happens, then you see a man walking up the stairs then you see a mother cooking food for her children and then door bell rings and she opens the, then you here a gun shot and you see the a man running away. ...read more.

The sound they use is a theme, the theme is fast and its goes with the images and also it's dramatic and thrilling and that peppers the audience for the show. When the charters are shown they are showed with they equipment and that images symbolises what they are going to be doing in the show. The logo for the show is CSI witch stands for Crime Scene Investigation and that is cleaver and unique. The shows logo is the letters CSI and the logo represent the show and what the characters do. We will be using this show to make ideas for our show. There will be five main characters in the show; they will be introduced to the audience in the credit sequence, each charter will be different to suit the audiences taste. The charters will be fully introduced to the audience later on the show, in the credit sequence each character will be doing different thing and that will tell the audience how each character different. ...read more.

Then you here the door bell ring then the women opens the door and you hear is a sound of a gun fired, and that creates a action code because the audience don't if the women is going to die or not. Then you see the man with the gun ruining away and that creates tension and then you here the sound of the police sirens then the credit sequence plays. The pre-credit sequence will prepare the audience for the rest of the show. In the credit sequence you see the main character being introduced by sowing them in action and that gives the audience idea of what kind of show this is because it is similar to other crime shows but different in it own ways. Our show will gain the attention of the audience because the audience know what to expect in the show and our show if different form the other crime shows in it's owns ways. Our show will be popular among the audience because it will keep them in suspense and ...read more.