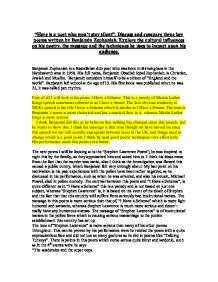 &quot;Here is a poet who won't stay silent&quot;. Discuss and compare three key poems written by Benjamin Zephaniah. Explore the cultural influences on his poetry, the message and the techniques he uses to impact upon his audience.

"Here is a poet who won't stay silent". Discuss and compare three key poems written by Benjamin Zephaniah. Explore the cultural influences on his poetry, the message and the techniques he uses to impact upon his audience. Benjamin Zephaniah is a Rastafarian dub poet who was born in Birmingham in the Handsworth area in 1958. His full name, Benjamin Obadiah Iqbal Zephaniah, is Christian, Jewish and Muslim. Benjamin considers himself to be a citizen of "England and the world". Benjamin left school at the age of 13. His first book was published when he was 22, it was called pen rhythm. First of all I will look at his poem, I Have a Scheme. ...read more.

His performance made this poem even better. The next poem I will be looking at is the "Stephen Lawrence Poem"; he was inspired to right this by the family, as they approached him and asked him to. I think his ideas came from the fact that the murder was racist, also I think as the investigation was flawed this caused a public outcry, which Benjamin felt very strongly about. My last point on his motivation is his past experiences with the police have been rather negative, as he discussed in his performance, such as when he was arrested, and also his cousin, Michael Powel, died in police custody. ...read more.