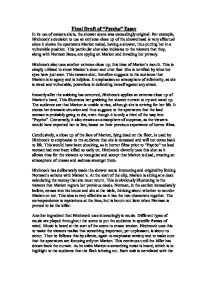 Final Draft of "Psycho" Essay In its use of camera shots, the shower scene was exceedingly original. For example, Hitchcock's decision to use an extreme close up of the showerhead is very effectual since it shows the spectators Marion naked, having a shower, thus putting her in a vulnerable position. This particular shot also indicates to the viewers that they, along with Norman Bates, are spying on Marion and invading her privacy. Hitchcock also uses another extreme close up, this time of Marion's mouth. This is simply utilized to show Marion's sheer and utter fear. She is terrified by what her eyes have just seen. This camera shot, therefore suggests to the audience that Marion is in agony and is helpless. It emphasises an atmosphere of inferiority, as she is weak and vulnerable, powerless in defending herself against any attack. Instantly after the stabbing has occurred, Hitchcock applies an extreme close up of Marion's hand. This illustrates her grabbing the shower curtain to try and stand up. The audience see that Marion is unable to rise, although she is striving for her life. It shows her dramatic situation and thus suggests to the spectators that the lead woman is probably going to die, even though it is only a third of the way into "Psycho". Conversely, it also creates an atmosphere of suspense, as the viewers would have expected her to live, based on their previous experience of horror films. Conclusively, a close up of the face of Marion, lying dead on the floor, is used by Hitchcock to emphasise to the audience that she is deceased and will not come back to life. ...read more.

The camera zooms out from Marion's eye to her face, then to her body during the shower scene. There could be two possible explanations for this. Firstly, Hitchcock is permitting the audience time to determine that Marion is dead. Secondly, he may want the audience to assume that Marion is having an "out of body" experience where her soul is moving away from her dead body, looking back at it. As well as a zoom out, a zoom in is also used in this scene, from a view of the whole bath to a focus on the plughole. This is used to suggest how fragile life is, as it represents Marion's life being washed away, showing the audience that she is dead. For the original spectators, this would have been unbelievable, and they would have expected her to come back to life. But she does not, and this is the important shot that suggests Marion is going to die. Many features seem to be missing in the shower scene, which could have been included to enhance it. Although this may have caused controversy, Hitchcock may perhaps have decided to display more sexual parts. Blood for wounds could also have been applied by Hitchcock to develop the shower scene. Furthermore, there is no precise camera shot that shows the knife entering the flesh. Hitchcock does not display the face of the murderer to the audience, but for good reason; as if it was exposed it would have ruined the whole story line of "Psycho." ...read more.

In this movie a woman in her underwear is stabbed to death. Whilst a couple are having sex in "Predator2"(1990) the man is killed, and in "American Psycho"(2000) the eradicator murders women after having sex with them, and stores the bodies in a room. "The Shining"(1980) and "Halloween" are related to "Psycho", as they both have men in the shower who get stabbed; in one case the woman is the assassin. All of this content clearly owes its origin to "Psycho." Previous to "Psycho" a murder was never displayed, but in this film the slaughter is shown and heard in detail. This particular technique is used in modern films, for instance in "Nightmare on Elm Street"(1984), a nail is heard scrapping on the wall, which is similar to "Psycho" as we hear a screeching noise when the murder takes place. "Candyman"(1992) also shows a slaughter and allows the audience to hear the "murder music". In early horror films the results of murder were not even talked about, let alone shown, but Hitchcock decided to include these. In "Psycho" Norman gets rid of the body of Marion, wrapped in the shower curtain, by throwing it into the swamp. We now commonly see a 'clearing up' after murder scene. For example in "American Psycho" we view the killer put all the dead bodies into a room, whilst in "It"( ) we observe bodies in the cave. "Jeepers Creepers"(2001) copies the technique used in "Psycho" more explicitly, as it demonstrates the assassin wrapping a dead body in a plastic bag and throwing it in a swamp. These characteristics would not be present now if it was not for Hitchcock, and his big hit, "Psycho." ...read more.