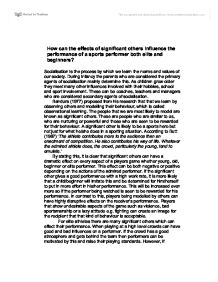 How can the effects of significant others influence the performance of a sports performer both elite and beginners?

How can the effects of significant others influence the performance of a sports performer both elite and beginners? Socialisation is the process by which we learn the norms and values of our society. During infancy the parents who are considered the primary agents of socialisation mainly determine this. As children grow older they meet many other influences involved with their hobbies, school and sport involvement. These can be coaches, teachers and managers who are considered secondary agents of socialisation. ...read more.

According to Butt (1987) 'The athlete contributes more to the audience than an enactment of competition. He also contributes his way of life. Whatever the admired athlete does, the crowd, particularly the young, tend to emulate.' By stating this, it is clear that significant others can have a dramatic effect on every aspect of a players game whether young, old, beginner or elite performer. This effect can be both negative or positive depending on the actions of the admired performer. ...read more.

Players that show undesirable aspects of the game such as violence, bad sportsmanship or a lazy attitude e.g. fighting can create an image for the recipient that that kind of behaviour is acceptable. For elite athletes there are many significant others which can effect their performance. When playing at a high level crowds can have good and bad influences on a performer. If the crowd has a good atmosphere and gets behind the team then performers can be motivated by this and raise their playing standards. However, if members of the crowd direct abuse at the athletes they may become more involved with the crowd rather than the game. ...read more.