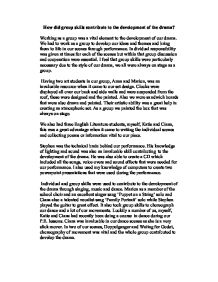 How did group skills contribute to the development of the drama? Working as a group was a vital element to the development of our drama. We had to work as a group to develop our ideas and themes and bring them to life in our scenes through performance. Individual responsibility was given at times for each of the scenes but within that group discussion and cooperation were essential. I feel that group skills were particularly necessary due to the style of our drama, we all were always on stage as a group. Having two art students in our group, Anna and Marion, was an invaluable resource when it came to our set design. ...read more.

Stephen was the technical brain behind our performance. His knowledge of lighting and sound was also an invaluable skill contributing to the development of the drama. He was also able to create a CD which included all the songs, voice overs and sound effects that were needed for our performance. I also used my knowledge of computers to create two powerpoint presentations that were used during the performance. Individual and group skills were used to contribute to the development of the drama through singing, music and dance. Marion as a member of the school choir and an excellent singer sang 'Puppet on a String' solo and Ciana also a talented vocalist sang 'Family Portrait' solo while Stephen played the guitar to great effect. ...read more.

Our devised piece was very fast-moving and stylised so group skills were important in that we knew where we were meant to be at all times throughout the performance. I was important in holding our group together, I kept everyone focused and avoided distractions. I organised a lot of the rehearsal schedule and put a lot of time into writing scenes. I continually researched collecting poems, phrases, sayings, images and kept everyone motivated. Every member of our group contributed substantially to the development of our drama in accordance to the different skills and interests. Devising a performance can be very stressful and the group's ability to support and encourage one another was a great help and we produced a successful piece through teamwork and co-operation. ...read more.