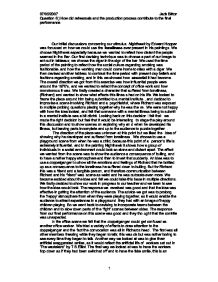 How did rehearsals and the production process contribute to the final performance.

Our initial discussions concerning our stimulus Nighthawk by Edward Hopper was focussed on how we could use the loneliness ever present in his paintings. We choose Nighthawk especially because we wanted to reflect how distant the people seemed in the Bar. Our first devising technique was to choose a part of our image to act out in tableaux; we choose the cigar in the sign of the bar. We used the time period of the painting to reflect how the social culture regarding smoking was fashionable, and how the working man could come home to relax with a cigar. We then devised another tableau to contrast the time period with present day beliefs and fashions regarding smoking, and in this we showed how unsocial it had become. The overall direction we got from this exercise was how influential people were around the 1970's, and we wanted to reflect the concept of office work and how monotonous it was. ...read more.

But for Richard this was a friend and a tangible person, and therefore communication between Richard and his 'friend' was scene as weird and he was outcaste even more. We became excided about the idea and felt we could take this base in multiple directions. We firstly decided to show our work in progress to our teacher and we keen to see how the idea would look. The response we received was good and that the idea was effective in getting the attention of the audience. The advice we got was to prolong the 'happy' atmosphere from when they were playing together, as it would enable the audience to attract experiences in a playground they had with an image of happy children playing. So we went back to devising to incorporate teams between the children and to slow down parts of the 'fight' scenes between sides. The response from our final performance on this scene was good and they thought that the contrite was unexpected. ...read more.

Speed Runs and exaggerations were used later on in the rehearsal schedule as they affected the efficiency and delivery of lines rather than alter the technique. The benefit of speed runs was that it helped motivate the group and get some energy in the rehearsals and performance. By scaling emotions, actions, movements and voice 'larger than life' it helped find the right level by reducing the level until it becomes clear where the right level was. The sequences in the office scene took a lot of rehearsal time up as it was fundamental to be in sync. The idea originated from an exercise looking to display the moronic monotonous images, and we diced to bring them together in choric scene where the movements reflected the dialogue. We wanted to make the images seem more robotic and therefore we practiced this right up until our performance. The units and objectives ?? ?? ?? ?? 07/05/2007 Jack Bitton Question 6.) How did rehearsals and the production process contribute to the final performance. 1 ...read more.