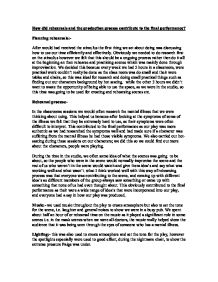 How did rehearsals and the production process contribute to the final performance? Planning rehearsals:- After would had received the stimulus the first thing we set about doing was discussing how to use our time efficiently and effectively. Obviously we needed to do research first on the stimulus however we felt that this should be a ongoing process rather then do it all at the beginning an then rehearse and practicing scenes which was mainly done through improvisation. We decided this because every week we had 2 hours in a classroom, were practical work couldn't realty be done as the class room was do small and their were tables and chairs, so this was ideal for research and doing small practical things such as finding out our characters background by hot seating. while the other 3 hours we didn't want to waste the opportunity of being able to use the space, as we were in the studio, so this time was going to be used for creating and rehearsing scenes etc. Rehearsal process:- In the classrooms sessions we would often research the mental illness that we were thinking about using. This helped us because after looking at the symptoms of some of the illness we felt that they be extremely hard to use, as their symptoms were often difficult to interpret. ...read more.

Tech rehearsal:- Our Tech rehearsal really helped contribute to our final performance as it helped get rid of any last minute problem that we had, and also gave us chance to readjust any lightning and sound problems that we were having. One thing that we changed during this last rehearsal was that we needed to mark where the chairs were going to go for the psychiatrist scene as during the rehearsal we were never sure where they should go so the spotlight was on them properly. This contributed to our final performance as these scenes would have been no where near as effective as they were Problems during the rehearsal process:- One problem that came up during the rehearsal process was the scene where Oliver has to slap Rowan. They were having trouble making the slap look realistic without Oliver actually slapping her. However by working as a team we managed to overcome this problem letting Oliver practice on other people in our group and by all of us standing at different angles around them where the audience would be, too see if it looked alright. Eventually we managed to get the perfect angle and the timing of the slap really good. ...read more.

So far we had three characters, the father, the mother and the child who would later have a split personality. We felt that the father's figure obviously needed to be fleshed out, as it needed to show why he would kill his wife; we did this through various approaches such as improvisation and hot seating. This is where my character emerged. We came up with the idea of the father being in a pub with a friend i.e. me, to show he's an alcoholic and that's the reason why he is so aggressive towards his wife. The first idea of my character was to represent society, and show the audience how people who aren't suffering from mental illness such as them react to people who are. My character would only be really bother about himself, and not really listen to any of the father's problems. Obviously this was going to be a very stereotypical view, as not everyone treats people with a mental illness like that. However one member of the group suggested that I also should have a mental illness, and that all of these character above, i.e. mother, daughter, father and father's friends could all be linked by the way of a physiatrist, who try's to treat them all. ...read more.