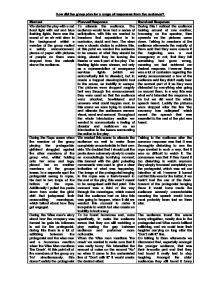 How did the group plan for a range of responses from the audience? Moment Planned Response Received Response We started the play with a red flood light with red and blue flashing lights, there was the sound of an air raid siren in the background whilst a member of the group recited a safety announcement, pieces of paper with pictures of people on them were dropped from the catwalk above the audience. To alienate the audience. The audience would have had a sense of anticipation, with this we wanted to transform that expectation in to confusion, doubt and fear. The siren was a classic choice to achieve this, at this point we wanted the audience to be unsure of what they should be doing, should they be leaving the theatre or was it part of the play. The flashing lights were chosen, not only as a representation of emergency services lights (which we automatically link to disaster), but to create a trapped claustrophobic feel to the scene, an inability to escape. The pictures were dropped roughly half way through the announcement they were used so that the audience were shocked, bewildered and unaware what could happen next. In this scene we were trying to confuse and alienate the audiences senses: visual, aural and sensual. ...read more.

At this point all of the members of the group cry 'No' simultaneously, this doesn't satisfy the protagonist as he says: "Surely it was more dramatic than that Wise man!" to a response of "You're right Joe, it was!" This prompts the group into screaming 'No' falling to the floor, writhing around, pounding the ground, sobbing and making a racket. Only when the Wise man screams, "Stop! Stop! Stop!" with a "Don't milk it!" from the protagonist do we stop. To be found humorous and, more specifically, to make the audience aware that they are still watching a play making the gap between audience and performer more noticeable. When the Wise man mentions 'the crash' we wanted to make sure that it was really funny. We intensified the amount of noise on the second "No" so when it came to the understated line of "Don't milk it!" it would create the desired effect. The audience found the scene funny altogether, mostly due to the protagonist and Wise man's brilliant adlibbing, and we could hear their laughter carrying on long after the "Don't milk it!" line. On talking to them afterwards we discovered that, especially amongst the younger audience, that was their favourite part and that they had found it really had to stop laughing. ...read more.

Talking to the audience afterwards a lot of them found the image of the protagonist speaking his final words really poignant. A couple felt sad and depressed, linking it back to the original image. A lot of the people said the music matched it perfectly and that it made them feel a real connection to the moment. I think that if the protagonist had been hanging upside down then it would have completely lost the poignancy that was conveyed in the end, it would have been perceived humorously rather than seriously so I'm glad we didn't try and do it. We structured our performance so there was a lot of light and shade, humorous and dark moments along the way. This was so we didn't have a piece that was too depressing and also so we didn't have one that would gloss over the meanings we wanted to convey about the crudeness of human nature and that often we don't get the answers we want or need. We tried to encourage as much response out of the audience as possible so they could relate to our piece. All in all the responses were almost exactly how I anticipated them which I'm pleased about as the group was worried that the story wouldn't come across clearly enough or that the humour wouldn't be found funny enough, but luckily we had an audience of like-minded individuals who could understand to our play. ...read more.