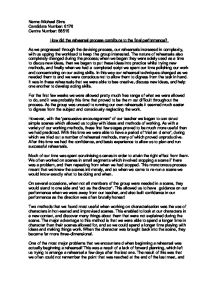 How did the rehearsal process contribute to the final performance?

Name: Michael Sims Candidate Number: 8178 Centre Number: 56515 How did the rehearsal process contribute to the final performance? As we progressed through the devising process, our rehearsals increased in complexity, with us upping the workload to keep the group interested. The nature of rehearsals also completely changed during the process; when we began they were solely used as a time to discus new ideas, then we began to put these ideas into practice whilst trying new methods, and finally when we had a completed script we spent our time polishing our work and concentrating on our acting skills. In this way our rehearsal techniques changed as we needed them to and we were conscious not to allow them to digress from the task in hand. It was in these rehearsals that we were able to bee creative, discuss new ideas, and help one another to develop acting skills. For the first few weeks we were allowed pretty much free range of what we were allowed to do, and it was probably this time that proved to be the most difficult throughout the process. As the group was unused to running our own rehearsals it seemed much easier to digress from the subject and consciously neglecting the work. ...read more.

When the character was brought back into the scene, they became far more three-dimensional. One of the most major problems that we encountered when beginning a rehearsal was actually beginning a rehearsal! This was a result of a lack of forward planning, which left us trying to arrange a rehearsal a few days after the last one. The result of this was that we often could not remember the point that was reached at the end of the last meet, and so time was usually wasted in backtracking. The obvious and simple solution to this was the planning of the next rehearsal at the end of each meet, as this allowed us to have a clean and concise start to each rehearsal. After a few weeks of regular structured rehearsals we reached a point where we actually had a tried and tested method to each rehearsal, and so we were able to come to each meet knowing would be expected of us, and also knowing how much work was probably going to be done. This helped greatly with the planning of rehearsals as time could be easily managed without too much wasted. ...read more.

Our rehearsals took place in thee very different locations; the small, enclosed drama room, the large and airy youth centre hall, and the even larger school hall in which we would be having our final performance. This difference of location proved to be quite a serious problem as our work had very different intensities in each one. This problem, however, was out of our control. Our location of rehearsal was dependant on when the rehearsal was taking place, as the school hall was often in use during the school day, we were forced to use the drama room, and outside of school time we had to use the youth centre. It would have been preferable to use the school hall, and our lack of time rehearsing in this space may have lead to one of our most major performance problems; some of scenes lacked intensity and our use of space (or lack of it) was the cause of this. Apart from these problems, our intense and structured rehearsal regime meant that we had very in-depth knowledge of our messages, and the actual performance. Although we took our time in finding our preferred working method, we eventually were able to structure productive rehearsals which focussed on the areas of our performance that needed the most attention. ...read more.