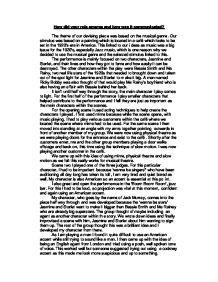 How did your role emerge and how was it communicated? The theme of our devising piece was based on the musical genre. Our stimulus was based on a painting which is located in a caf� which looks to be set in the 1920's era in America. This linked to our ideas as music was a big issue for the 1920's, especially Jazz music, which is one reason why we decided to use the musical genre and the selected stimulus linked to this. The performance is mainly focused on two characters, Jasmine and Starlet, and their lives and how they got to fame and how easily it can be destroyed. The other characters within the play were Bessie Smith and Ma Rainy, two real life stars of the 1920s that needed to brought down and taken out of the spot light for Jasmine and Starlet to make it big. A man named Ricky Bobby was also thought of that would play Ma Rainy's boyfriend who is also having an affair with Bessie behind her back. ...read more.

Scene two I played one of the three judges. For this particular character, I had to be impatient because 'wanna be singers'' who have been auditioning all day long has taken its toll, I am very tired and quiet bored as well. My character is also American so an accent is essential at this point. I also greet and open the performance in the 'Boom Boom Room', jazz bar. For this I had to be loud, so projection was vital at this moment, confident and again using an American accent. My character, who goes by the name of Jack Murray, comes into the piece half way through and was developed because the 'wanna be stars' Jasmine and Starlet want to make it bigger than Bessie Smith and Ma Rainey who are already big superstars. The group thought of maybe including an agent as another character within the story. We wrote down ideas and finally improvised a scene with him, Jasmine and Starlet about him wanting to sign them up. ...read more.

character seem more suspicious as he immediately greets himself to both jasmine and Starlet and signs them up near enough straight away from meeting them and says something needs to be done to get Bessie Smith and Ma Rainy out of the spot light. The first scene the audience get to see Jack Murray is one where he talks to the audience and this is how the audience get to know who he is and why/how he connects to the story. I need to be very confident and my voice needs to be projected most of the time unless I am whispering to both Jasmine and Starlet. I am a business man who knows his business and my body language cannot be shy and hidden away. When I walk I can't stand behind people. I need to stand at the front with my head healed high as this would indicate that my character likes to be in control, even though in reality he only gives instructions out to Jasmine and Starlet and makes them do the deed, and finally lets them take the blame when the police get involved. ...read more.