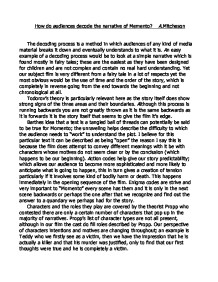 How do audiences decode the narrative of Memento?

How do audiences decode the narrative of Memento? A.Mitcheson The decoding process is a method in which audiences of any kind of media material breaks it down and eventually understands to what it is. An easy example of a decoding process would be to look at a simple narrative which is found mostly in fairy tales; these are the easiest as they have been designed for children and are not complex and contain no real hard understanding. Yet our subject film is very different from a fairy tale in a lot of respects yet the most obvious would be the use of time and the order of the story, which is completely in reverse going from the end towards the beginning and not chronological at all. Todorov's theory is particularly relevant here as the story itself does show strong signs of the three areas and their boundaries. ...read more.

Enigma codes are strive and very important to "Momento" every scene has them and it is only in the next scene backwards or perhaps the one after that we recognize and find out the answer to a quandary we perhaps had for the story. Characters and the roles they play are covered by the theorist Propp who contested there are only a certain number of characters that pop up in the majority of narratives. Propp's list of character types are not all present, although in our film the cast do fill roles described by Propp. Our perspective of characters intentions and motives are changing throughout; an example is Teddy who we firstly see as a victim, then we have the impression that he is actually a killer and that his murder was justified, only to find that our first thoughts were true and he is completely a victim. ...read more.

The objects within each short scene is the key to the next and in order for you to understand the sequence of events you must watch intently and make sure you catch all of these symbolic codes. This film in my view is very unique in respect to its backward time running. Although it does make it different it does not make it a good film a good film in my view is a film that provokes emotion in the audience the bigger or stronger the emotion/s the better the film; for me this was not the case for Momento. The plot is complicated yet not totally impossible to work with, perhaps the reason for my dislike of the film is because I had watched segments of it at a time and also that I missed the concluding part. In all Memento is no big Hollywood big seller simply a quirky chronologically challenged movie that attempts something radical and does it ok, the lack of big names involved does not help it's case. WORD COUNT 825 ...read more.