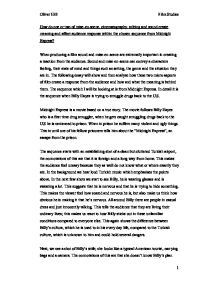 How do one or two of mise-en-scene, cinematography, editing and sound create meaning and affect audience response within the chosen sequence from Midnight Express?

How do one or two of mise-en-scene, cinematography, editing and sound create meaning and affect audience response within the chosen sequence from Midnight Express? When producing a film sound and mise-en-scene are extremely important in creating a reaction from the audience. Sound and mise-en-scene can convey a characters feeling, their state of mind and things such as setting, the genre and the situation they are in. The following essay will show and then analyze how these two micro aspects of film create a response from the audience and how and what the meaning is behind them. The sequence which I will be looking at is from Midnight Express. In detail it is the sequence when Billy Hayes is trying to smuggle drugs back to the U.S. Midnight Express is a movie based on a true story. The movie follows Billy Hayes who is a first time drug smuggler, when he gets caught smuggling drugs back to the U.S he is sentenced to prison. When in prison he suffers many violent and ugly things. This is until one of his fellow prisoners tells him about the "Midnight Express", an escape from the prison. ...read more.

The connotations of this are that Billy is afraid and scared of the man, maybe because thinks that he's been found out. Without his glasses on Billy seems vulnerable and when he cowers into the corner this emphasises this. The audience now react to the fact that Billy is almost making sure he's caught, although he's not trying to. In my opinion from this point onwards we start to support Billy and hope he gets on the plane, this is because we as an audience usually like to have a happy ending. We now have a series of shots of Billy getting his bag searched, he seems quite relaxed. We can tell this by the heartbeat noise in the background which has slowed dramatically. Next, the guard searches his bag, this doesn't seem to bother Billy and when the guard pulls out a Frisbee, Billy almost cracks a smile. This shows that Billy is feeling a lot calmer about the situation he is in. this tells us, the audience, that because he almost cracked a smile we see him safer than ever before in the sequence, although, when Billy grabs his bag and tries to leave, the guard stops him and a moment of silence occurs, except for the heartbeat which quickens. ...read more.

so the attendants don't have to look at it, but as he is about to step on the plane he gets patted on the shoulder by security and we hear a sharp sound and his heartbeat loud and faster. This suggests that he is in danger, and is going to be caught. When he empties the bag in his hand we know that it is obvious to the security that he is hiding something. The audience now reacts to think that there is no chance of Billy getting on the plane and now we are scared of what will happen to him. The mise-en-scene and sound have been extensively used in this sequence to create an reaction from the audience to the character of Billy Hayes. These two micro aspects of film have shown how smuggling was apparent in the 80's and how this compares to drug smuggling today. In my opinion the sequence is effective in many ways and generally is good to watch. It is a good watch because of the amount of suspense and tension used in the sequence, the overall effect is we feel scared for Billy and wonder what will happen next. ?? ?? ?? ?? Oliver Hill Film Studies 1 ...read more.