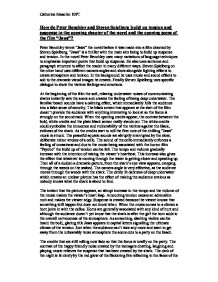 How do Peter Benchley and Steven Spielberg build up tension and suspense in the opening chapter of the novel and the opening scene of the film "Jaws"? Peter Benchley wrote "Jaws" the novel before it was made into a film directed by Steven Spielberg. "Jaws" is a thriller with the main aim being to build up suspense and tension. In the novel Peter Benchley uses many variations of language techniques to emphasise important points that build up suspense. He also uses sentence and paragraph structure to affect the reader in many different ways. Steven Spielberg on the other hand uses different camera angles and shots alongside lighting effects to create atmosphere and tension. In the background he uses music and sound effects to add to the dramatic visual images he creates. Finally Steven Spielberg uses specific dialogue to show the victims feelings and emotions. At the beginning of the film the soft, relaxing underwater noises of communicating sharks instantly sets the scene and creates the feeling of being deep underwater. The familiar beach sounds have a calming effect, which immediately lulls the audience into a false sense of security. The black screen that appears at the start of the film doesn't provide the audience with anything interesting to look at so the focus is strongly on the soundtrack. When the opening credits appear, the contrast between the bold, white credits and the plain black screen really stands out. The white credits could symbolize the innocence and vulnerability of the victims against the black, evilness of the shark. As the credits start to roll the first note of the chilling "Jaws" music is struck. The peaceful aquatic sounds are abruptly interrupted by the slow, deliberate minor strokes of a cello. The sound of the cello immediately enforces a feeling of uneasiness and due to the music being associated with the horror film "Psycho" the build up of tension can be felt. ...read more.

In the novel the reader knows that the shark is closing on the woman by the way Peter Benchley uses more and more short sentences and also repeats the word 'she' when referring to the woman. In the film the audience knows that the shark is close because they can see from the shark's eye view that the shark is looking directly up at Chrissie's legs. Another sign that the shark is getting closer is when the "Jaws" music begins to increase in tempo and volume. At this point the writer uses the woman's emotions to build up suspense. The woman is relaxed, calm and relieved that she has not come to any harm but in actual fact this is totally the opposite to what she should be feeling. Because the reader knows that the fish is nearby and has every intention of killing her the reader is left guessing at whether the woman will notice and escape. Peter Benchley uses the woman's hope to create the same feeling in the reader. He points out a number of facts that make the reader believe that the woman will survive. For instance he has written 'She was only 50 yards from shore' and 'She could see the line of white foam where the waves broke on the beach'. Both these points show that the woman is within a short distance of the shore and that she could still make it out of the water safely, thus giving the reader hope and creating suspense. The author also uses the fish's feelings to build suspense. From the fish's point of view the girl is referred to only as 'prey'. This shows that the fish will not treat the woman any different from anything else it would eat so the reader knows that the fish is going to hunt the woman down at all costs. The vibrations that the fish is receiving from the woman get stronger and stronger which makes the fish more and more eager to get to her. ...read more.

Also, I think that sounds are very influential to the build up of tension and in the film you can just hear these instead of having to read a description of them. For instance, when you hear Chrissie's screaming you immediately feel tense because you instinctively know that the sound is associated with pain and panic. In the novel the screaming is only described. The "Jaws" music also plays a major role in the build up of tension as it raises the heartbeat, which naturally makes the viewer much more scared. Nothing in the novel can create such a powerful effect. In the film the lighting is also used to create the eerie atmosphere that builds tension. In the novel the lighting is not described much and cannot be shown in the way it can in the film. Overall the film can take advantage of the audience's sight and hearing and how they react to these two senses to create a much more dramatic atmosphere than in the novel. In the film the inclusion of the drunken boy also adds to its effectiveness because when he has passed out the contrast between him and Chrissie really creates atmosphere. Every time the camera switches to the boy the audience is reminded of how frantic the atmosphere around Chrissie is. The contrast of these two opposite atmospheres makes the attack seem far worse in the film than in the novel. I think that the film involves the audience more than the novel because the use of camera shots can bring the audience close to the action. The shark's eye view is a very good shot and ultimately brings the audience into the middle of all the panic and confusion. It also build suspense as the audience can see exactly what the shark can see and when the shark is advancing towards Chrissie's legs they know exactly what the shark is aiming for. When the attack is going on the close-ups at water level make the audience feel like they're in the water. Catherine Meachin 10PT ...read more.