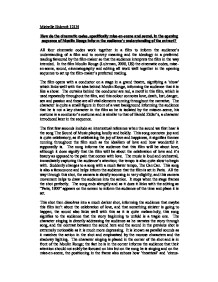 How do the cinematic codes, specifically mise-en-scene and sound, in the opening sequence of Moulin Rouge inform the audience's understanding of the extract?

Michelle Holcroft 12LN How do the cinematic codes, specifically mise-en-scene and sound, in the opening sequence of Moulin Rouge inform the audience's understanding of the extract? All four cinematic codes work together in a film to inform the audience's understanding of a film and to convey meaning and the ideology in a preferred reading favoured by the film-maker so that the audience interprets the film in the way intended. In the film Moulin Rouge (Luhrman, 2000, US) the cinematic codes, mise-en-scene, sound, cinematography and editing all work well together in the opening sequence to set up the film-maker's preferred reading. The film opens with a conductor on a stage in a grand theatre, signifying a 'show' which links well with the idea behind Moulin Rouge, informing the audience that it is like a show. The curtains behind the conductor are red, a motif in this film, which is used repeatedly throughout the film, and this colour connotes love, death, lust, danger, sex and passion and these are all vital elements running throughout the narrative. The character is quite a small figure in front of a vast background informing the audience that he is not a key character in the film as he is isolated by the mise-en-scene, his costume is a conductor's costume and is similar to that of Harold Zidler's, a character introduced later in the sequence. The first few seconds include an intertextual reference when the sound we first hear is the song The Sound of Music playing loudly and boldly. ...read more.

They are presented as quite unnerving as they just stare into the camera and the close up shots bring the audience closer to this corrupt, sinister world that has been created merely by the cinematic codes, and all of this is building on the audience's understanding of the film, even after simply the first few minutes. The next thing shown to the audience is a bright light at the end of the alleyway signifying to the audience that possibly, by following this path they will turn away from the inevitable tragedy looming, and there is a glimmer of hope for the characters that the audience rapidly see, when suddenly the camera quickly tears away from this light and straight towards the inescapable tragedy. The camera movements are much jerkier and then, as the camera is tracking through the back streets, it speeds up, informing the audience that something is about to happen, and they are about to be taken somewhere important, to something vital to the plot. At the same time the sound works together with this as it builds up more and more creating tension as the audience wonder where they are being taken. The camera then leads the audience through a window, and as the camera tracks towards Christian, the main character, we see the curtains blow, once again creating the feeling of the audience being like the wind. After the journey through Montmarte and the music and lighting, Christian, the main character, looks like the audience may well have expected. ...read more.

She is perfectly made up, creating a sophisticated appearance, and the way in which she holds her head connotes that she is calm and composed. She is holding a cigarette and is portrayed to the audience as extremely mysterious; the positioning of the top hat on her head, slightly tilted forwards, emphasizes this. All the other girls were introduced in great colour and in such a different way that this introduction helps inform the audience that she is different, she is set apart from the other, she is the one that Christian falls helplessly in love with. She is surrounded by darkness and shadows, and this presents the idea to the audience that along with her comes tragedy and an inescapable doom. In just these first five minutes the audience are informed greatly about the narrative of the film. The use of the cinematic codes, especially mise-en-scene and sound informs the audiences understanding of the sequence, and they all compliment each other in such a way that the audience take a preferred reading. The techniques the director uses give the audience one reading, so that the audience read the film exactly as the director wishes, the sequence first sets up enigmas, and disorientates the audience slightly. Then gradually throughout the extract the narrative begins to unfold before their eyes with the use of the cinematic codes contributing to this and delivering the message clearly to the audience as the characters are being introduced and the setting established. The audience are drawn into the lives and tragedies of the characters and escape into the film, feeling what the characters feel, and gaining pleasure from the film. 2,571 words ...read more.