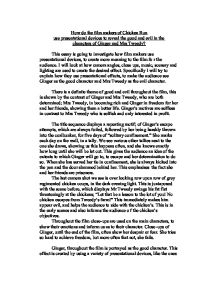 How do the film makers of Chicken Run use presentational devices to reveal the good and evil in the characters of Ginger and Mrs Tweedy?

How do the film makers of Chicken Run use presentational devices to reveal the good and evil in the characters of Ginger and Mrs Tweedy? This essay is going to investigate how film makers use presentational devices, to create more meaning to the film for the audience. I will look at how camera angles, close ups, music, scenery and lighting are used to create the desired effect. Specifically I will try to explain how they use presentational effects, to make the audience see Ginger as the good character and Mrs Tweedy as the evil character. There is a definite theme of good and evil throughout the film, this is shown by the contrast of Ginger and Mrs Tweedy, who are both determined; Mrs Tweedy, in becoming rich and Ginger in freedom for her and her friends, showing them a better life. Ginger's motives are selfless in contrast to Mrs Tweedy who is selfish and only interested in profit. The title sequence displays a repeating motif; of Ginger's escape attempts, which are always foiled, followed by her being harshly thrown into the coalbunker, for five days of "solitary confinement." ...read more.

It also helps us to decide whose side to take. When Ginger discovers that Rocky has left, and never could fly, as she walks out and shows the rest of the chickens, the weather changes. It becomes stormy and starts raining, matching the mood of the chickens. This is referred to as a pathetic fallacy. I think this creates the effect that everything's worse than it really is, because it all seems so much more depressing. After Edwina's death, Ginger sits on top of a chicken coup, crying, with forlorn hope as she watches a flock of birds flying freely into the distance over row upon row of grey regimented chicken coups. With renewed determination she declares a meeting for their next escape plan. This shows the strength on her character, and establishes their next escape plan with more importance than the others, so the audience have higher hopes for this escape. In role call, Mrs Tweedy begins walking towards 'Babs' who fears the worst after Edwina's fate, knowing she has not laid the required amount of eggs. Ginger holds her hand to comfort her as Mrs Tweedy approaches. ...read more.

This makes her appear more fearsome and powerful to the audience, intimidating them slightly. This also helps put the audience in the chickens' perspective, as they will always view her from a low angle. Whilst Mrs Tweedy is yelling at Mr Tweedy, we see her using a low angled shot from Mr Tweedy's perspective. She also walks towards the camera, this is intimidating for the audience. It puts them in the position of Mr Tweedy, and creates the effect that Mrs Tweedy is yelling at the audience. Throughout the film, there has been romantic tension between Rocky and Ginger. Just as they are about to kiss, which is something the audience have been waiting for, Mrs Tweedy ends this scene just before they do. This makes the audience feel annoyed with Mrs Tweedy, and creates suspense as to how they are now going to stop her. The music changes from happy to tense. Near the end of the film, the chickens are escaping in their flying contraption and Mrs Tweedy threatens their successful escape, before Ginger eliminates this threat, for the first time in the film, Mrs Tweedy is viewed using a higher angled shot, and Ginger from a low angled shot. This shows the audience that for the first time, Ginger has power over Mrs Tweedy. ...read more.