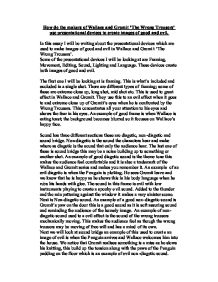 How do the makers of Wallace and Gromit 'The Wrong Trousers' use presentational devices to create images of good and evil.

How do the makers of Wallace and Gromit 'The Wrong Trousers' use presentational devices to create images of good and evil. In this essay I will be writing about the presentational devices which are used to make images of good and evil in Wallace and Gromit 'The Wrong Trousers'. Some of the presentational devices I will be looking at are Framing, Movement, Editing, Sound, Lighting and Language. These devices create both images of good and evil. The first one I will be looking at is framing. This is what's included and excluded in a single shot. There are different types of framing; some of these are extreme close up, long shot, mid shot etc. This is used to great effect in Wallace and Gromit. They use this to an evil effect when it goes to and extreme close up of Gromit's eyes when he is confronted by the Wrong Trousers. This concentrates all your attention to his eyes and shows the fear in his eyes. ...read more.

An example of a good non-diagetic sound is Gromit's paw on the door this is a good sound as it is soft assuring sound and reminding the audience of the homely image. An example of non-diagetic sound used to a evil effect is the sound of the wrong trousers mechanically moving. This makes the audience feel as though the wrong trousers may be moving of free will and has a mind of its own. Next we will look at sound bridge an example of this used to create an image of evil is when the Penguin arrives and Wallace welcomes him into the house. We notice that Gromit realises something is a miss as he slows his knitting, this build up the tension along with the paws of the Penguin padding on the floor which is an example of evil non-diagetic sound. The next presentational device I will be looking at is lighting. An example of lighting used to an evil effect is when the Penguin is holding a hand held drill and as the lightning flashes we see a shadow of the wrong trousers, the rain is also battering against the windows. ...read more.

An example of movement used for evil effect is when we see a point of view shot when Gromit is spying on the Penguin and it pans along when he walks away. This is suspicious scene and Gromit seems to believe that the penguin is up to no good. The next device we will be looking at is language. An example of good language is when Wallace and Gromit finally catch the penguin after a dramatic chase and Wallace says to Gromit 'Well done chap we've done it' this is ironic as Wallace was more of a hindrance than a help in catching the Penguin. An evil example of language is in one of the early scenes when Gromit is approached by the Wrong Trousers we see a shadow of the wrong trousers then it focuses in on Gromit's eyes. We see the fear in his eyes, although this is actually body language it can be portrayed as language. In 'Wallace and Gromit the Wrong Trousers' the makers use presentational devices to link it in with genre which makes the film funny. Animations are usually always funny and this one is no exception. ...read more.