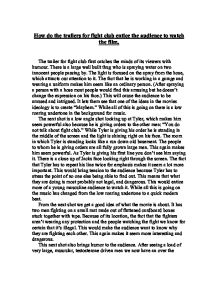 How do the trailers for fight club entice the audience to watch the film.

How do the trailers for fight club entice the audience to watch the film. The trailer for fight club first catches the minds of its viewers with humour. There is a large well built thug who is spraying water on two innocent people passing by. The light is focused on the spray from the hose, which attracts our attention to it. The fact that he is working in a garage and wearing a uniform makes him seem like an ordinary person. (After spraying a person with a hose most people would find this amusing but he doesn't change the expression on his face.) This will cause the audience to be amused and intrigued. It lets them see that one of the ideas in the movies ideology is to create "Mayhem." While all of this is going on there is a low roaring undertone in the background for music. The next shot is a low angle shot looking up at Tyler, which makes him seem powerful also because he is giving orders to the other men: "You do not talk about fight club." While Tyler is giving his order he is standing in the middle of the screen and the light is shining right on his face. ...read more.

He is violently grabbing a person in front of him who we can't see. Because he has a cigarette in his mouth while doing this doesn't make him seem professional. But he looks very cool, collected and like he knows what he is doing. The next shot is of Jack looking out the window of a passing bus. The camera stays in a fixed position but pivots to follow his face. The light is focused right on him so that we look there instead of being distracted by the other people on the bus. The next shot is of a golden colored ball being blown out of the base where it sits. I think this is the scene that would make the audience think that fight club is more than just a fight club. I think they have used a ball to blow up because it represents the earth they are trying to cause mayhem on. It could also represent a testicle; testicular cancer is a fairly large part of the film. The next shot shows the same white suit dressed men barging their way into a room and putting on balaclarvers. They are looking around the room very agitated, maybe looking for another person they are doing something wrong. ...read more.

It would also bring confusion to the audience because it would make them think why does someone with extremely large breasts have a name tag Bob. I think they have chosen the name Bob because it is a very stereotypical name for a man. The next shot is of the same earth/testicle shaped ball, which was coming off its stand. It is now rolling down some stairs and towards the camera. When the ball hits the first step the camera shakes like it was in an earthquake. I think this was a very effective way of showing the danger of the ball. The next shot is of an airplane hurling towards the ground. It's falling at such a speed that the chairs are being ripped out of the floor, the trolleys and peoples luggage are being thrown all across the screen. We then have a close up on Jacks face, he is not moving and is looking calmer then the audience would expect. This would make the audience feel that Jack doesn't really care about life and that he couldn't care less weather he lived or died. The last shot of Tyler saying "If this is your first night at fight club then you have to fight." This would cause the audience to feel a great amount of tension from hearing this. Specially because it is the last thing the audience are left with. Sam Gould ...read more.