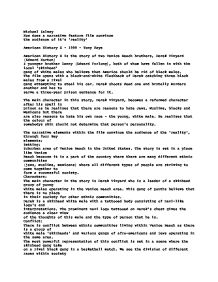 Michael Salway How does a narrative feature film convince the audience of it's 'reality' American History X - 1999 - Tony Kaye American History X is the story of two Venice Beach brothers, Derek Vinyard (Edward Norton) & younger brother Danny (Edward Furlong), both of whom have fallen in with the local 'skinhead' gang of white males who believe that America should be rid of black males. The film opens with a black-and-white flashback of Derek catching three black males from a rival gang attempting to steal his car. Derek shoots dead one and brutally murders another and has to serve a three-year prison sentence for it. ...read more.

The story is set in a place like Venice Beach because it is a part of the country where there are many different ethnic communities (jews, muslims, mexicans) where all different types of people are striving to come together to form a successful society. Characters: The main character in the story is Derek Vinyard who is a leader of a skinhead group of young white males operating in the Venice Beach area. This gang of youths believe that there is no place in their society for other ethnic communities. Derek is a skinhead white male with a tattooed body consisting of nazi-like logo's and interpretations. The prominent nazi logo tattooed on Derek's chest gives the audience a clear view of the thoughts of this male and the type of person that he is. ...read more.

Resolution: While Derek is in prison, he understands to look past racial or ethnic differences and that there is more to his life than his gang of skinheads. We see Derek's time in prison in different segments in black-and-white flashback form, and the segments help the audience understand why Derek has undergone this coming-of-age. Derek makes friends with many different ethnic backgrounded individuals and so when it's his time to be released, he wants to transform his own life and his misguided younger brothers. The flashbacks to Derek's time in prison attempt to involve the audience in how Derek has understood that he must change his life as there is more to it than conflict involved with this group of skinhead males. ...read more.