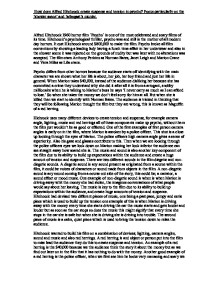 How does Alfred Hitchcock create suspense and tension in psycho? Focus particularly on the 'shower scene' and 'arbogast's murder.

How does Alfred Hitchcock create suspense and tension in psycho? Focus particularly on the 'shower scene' and 'arbogast's murder. Alfred Hitchcock 1960 horror film �Psycho` is one of the most celebrated and scary films of its time. Hitchcock's psychological thriller, psycho was and still is the mother of all modern day horrors. It cost Hitchcock around $800,000 to make the film. Psycho broke all film conventions by showing a leading lady having a lunch time affair in her underwear and also in the shower scene it was rejected on the grounds of nudity but was later with no alterations was accepted. The film stars Anthony Perkins as Norman Bates, Janet Leigh and Marion Crane and Vera Miles as Lila crane. Psycho differs from other horrors because the audience starts off identifying with the main character we are shown what her life is about, her job, her boy friend and just her life in general. When Marion takes $40,000, instead of the audience disliking her because she has committed a crime they understand why she did it after all it is from a arrogant, snobby millionaire when he is talking to Marion's boss he says 'I never carry as much as I can afford to lose.' ...read more.

When Norman and Marion are talking Norman talks of his mother, when he does this the camera focuses the audience on the dead birds connecting Norman's mother of murder and death. In the whole film there is this connection with birds. Birds are seen as watchers of the world which can be related to voyeurism and birds watching is a theme throughout the film; Marion's second name is Crane the city in which she comes from is called Phoenix and Norman's strange hobby of stuffing birds. Another example of voyeurism is when Norman is watching Marion getting undressed through a hole behind a picture. And another great clue of that is going to happen is that the picture is a painting of murder and rape. Hitchcock wanted to bring the audience right into the shower scene he wanted the audience to feel and experience everything that was going on. He did this in two ways the first one was that he used all of the key devices and the second one was that he split the scene up into three main parts the first being getting into the shower and showering the second being the attack and the third being when she is left on the floor. ...read more.

With the film being in black and white adds to the tension of the film, it doesn't give anything a way. Even though Hitchcock wanted to bring to audience into the film the black and white look doesn't let then get to close. Also Hitchcock was a master of using light, he could make a character stand out more then the rest or blend in with the rest. If the film was in colour it wouldn't be as effective. I think Hitchcock was a master at what he did and creating suspense and tension, he knew exactly when to get the audience on the edge of their seats and when to relax them. He was also a master at using certain devices like camera angles, lighting, music and sound, with every sot he took all of these components into account. I really enjoyed watching the film, I wasn't tense or in suspense as such, but I can imagine what effect it had in people in the 1960 and why the film was such a big hit. In my option I would give the film a 9/10 overall. And would recommend anyone go and watch it. By Mikie Gabriel McWilliams ...read more.