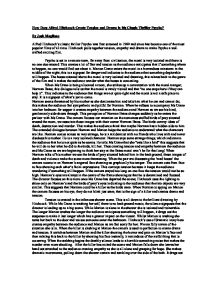 How Does Alfred Hitchcock Create Tension and Drama in his Classic Thriller Psycho?

How Does Alfred Hitchcock Create Tension and Drama in his Classic Thriller Psycho? By Josh Maglione Alfred Hitchcock's classic thriller Psycho was first screened in 1960 and since has become one of the most popular films of all time. Hitchcock pulls together tension, empathy and drama to make Psycho a well crafted exciting film. Psycho is set in a remote town, far away from civilisation, the motel is very isolated and there is no one else around. This creates a lot of fear and tension as the audience anticipates that if something where to happen, no one would find out about it. Marion Crane enters the motel in a horrendous rainstorm in the middle of the night; this is a signpost for danger and indicates to the audience that something deplorable will happen. The house situated above the motel is very isolated and daunting, this relates back to the genre of the film and it makes the audience wonder what the house is concealing. ...read more.

Thus creating tension and empathy between the audience and Ms Crane as we are beginning to think her stay at the Bates motel won't be for that long! When Norman talks of his mother we see the birds of prey situated behind him in the background, these images of death and violence make the scene more threatening. When the pair are discussing the 'mad house' the camera zooms in on Norman's angered face showing us graphically his temper. The camera cuts from face to face showing each other's facial expressions. This conveys tension because it keeps the audience wondering if something will happen. If the camera stayed too long on one face the tension would not be so high. Norman's eyes are always in the centre of the frame showing us that he is determined and focused. The director focuses on this more once Ms Crane has departed the scene; Hitchcock uses the lighting to shine only on Norman's and the birds of prey's eyes indicating to the audience that the two objects are very similar. ...read more.

She makes dramatic movements, pulling down the shower curtain and tumbling over the side of the bath. It drags out the pain and discomfort that she is suffering, she does not die quickly it is a slow painful death. Hitchcock wanted the audience to feel helpless and saddened. The blood pouring down the drain shows the audience that she is dead, it is a metaphor saying that her life is 'draining' away. The camera focuses on Marion's unblinking eye, this reminds us of Norman and his steady staring eyes. It relates the victim to the killer creating drama and tension. One of the key features Hitchcock wanted to convey in this scene is that it suggests horror and violence. Suggestion is often worse than reality. Hitchcock is a master of creating a thoughtful high-tension thriller that is designed to make the audience think about what is happening. Psycho is no exception with many twists and turns that keep the audience guessing. Hitchcock creates drama and tension at every turn in the plot to make Psycho an incredibly exciting densely packed masterpiece. ...read more.