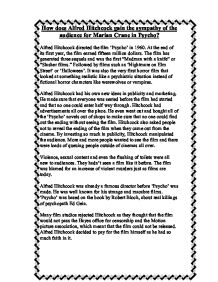 How does Alfred Hitchcock gain the sympathy of the audience for Marian Crane in Psycho? Alfred Hitchcock directed the film 'Psycho' in 1960. At the end of its first year, the film earned fifteen million dollars. The film has generated three sequels and was the first "Madman with a knife" or "Slasher films." Followed by films such as 'Nightmare on Elm Street' or 'Halloween'. It was also the very first horror film that looked at something realistic like a psychiatric situation instead of fictional horror characters like werewolves or vampires. Alfred Hitchcock had his own new ideas in publicity and marketing. He made sure that everyone was seated before the film had started and that no one could enter half way through. Hitchcock had advertisements all over the place. He even went out and bought all of the 'Psycho' novels out of shops to make sure that no one could find out the ending without seeing the film. Hitchcock also asked people not to reveal the ending of the film when they came out from the cinema. By investing so much in publicity, Hitchcock manipulated the audience. More and more people wanted to see the film and there were loads of queuing people outside of cinemas all over. Violence, sexual content and even the flushing of toilets were all new to audiences. They hadn't seen a film like it before. The film was blamed for an increase of violent murders just as films are today. Alfred Hitchcock was already a famous director before 'Psycho' was made. ...read more.

The audience feel sorry for her as it shows that he is the most dominant one. When the client goes away, Marian's colleague tells Marian that Mr. Cassidy was flirting with Marian and not with her as he must have seen her wedding ring. There are a few pictures up on the wall in the office. Behind Marian, there is a picture of a desert. This matches Marians life, Barron and alone. For most of the scene, Marian remains seated with her boss, colleague and client above her. She is also at the back of the shot, which makes her look frail and weak. When the people look down on her, it makes her appear unimportant. The audience really feel for Marian, as no one seems to be paying her much attention. During the scene, you learn that everyone has a light and dark side. E.g. the client is buying his daughter a house but won the money through gambling. Also, Marians pleasant boss had a bottle of whisky stored away in his office. At the end of the scene, when Marian leaves the office, her shadow is behind her. This shows that the evil side of Marian is behind her. Marians boss gave her $40,000 of Mr. Cassidy's money to put into the bank. The audience feel sympathy for her when she says to her colleague that she will bank it and then go home to sleep off her unhappiness. When we see Marian in the third scene, she is walking into her bedroom wearing black underwear. ...read more.

It also makes Marion look like a victim. Again in this scene, the police officer is looking down on Marion in the car, making Marion appear weak and vulnerable once more. The audience feel for Marion, as everyone seems to look down on her as if she was worthless and didn't have any value. When the policeman eventually lets Marion leave in the car, the tense music is played to build up suspense. Marion notices that the policeman is following her when she looks in her mirror. The mirror once again shows two different conflicting sides of good and evil. The audience knows how Marion must be feeling and they feel so sorry for her as she only wants to be free, and able to live her life the way she wishes. This film unquestionably shows that appearances can be deceiving! In this scene, it appears that the police officer is the enemy when really he is there to help. Also, later on in the movie, Marion meets a seemingly pleasant, genuine man named Norman Bates who in due course turns out to be a psychotic murderer who will be the one who takes Marion's life! In this film 'Psycho,' Alfred Hitchcock uses a wide variety of techniques to gain the audiences sympathy for Marion Crane. From camera shots to the clothes she wears, he spent a lot of his time planning the ways he would reveal her. The time and money that Hitchcock invested in the film paid off in the end when the film proved to be one of the best horror films of its time. ?? ?? ?? ?? ...read more.