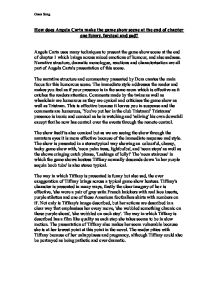 How does Angela Carta make the game show scene at the end of chapter one funny, farcical and sad?

How does Angela Carta make the game show scene at the end of chapter one funny, farcical and sad? Angela Carta uses many techniques to present the game show scene at the end of chapter 1 which brings across mixed emotions of humour, and also sadness. Narrative structure, dramatic monologue, reactions and characterisation are all part of Angela Carta's presentation of this scene. The narrative structure and commentary presented by Dora creates the main focus for this humorous scene. The immediate style addresses the reader and makes you feel as if your presence is in the same room which is effective as it catches the readers attention. Comments made by the twins as well as wheelchair are humorous as they are cynical and criticises the game show as well as Tristram. ...read more.

The way in which Tiffany is presented is funny but also sad, the over exaggeration of Tiffany brings across a typical game show hostess. Tiffany's character is presented in many ways, firstly the clear imagery of her is effective, 'she wore a pair of grey satin French knickers with real lace inserts, purple stilettos and one of those American footballers shirts with numbers on it'. Not only is Tiffany's image described, but her actions are described in a clear way that emphasises her every move, 'she wobbled something chronic on those purple shoes', 'she wobbled on each step'. The way in which Tiffany is described has a film like quality as each step she takes seems to be in slow motion. ...read more.

Brenda's reaction before the phone call from the police is quite different from her reaction after. Brenda comes into the house in a rage and automatically shouts at Tristram, she even 'aimed a big whack at him'. After the phone call, Brenda is quiet, 'making little noises in the back of her throat', this quick change of atmosphere as well as reactions is effective as the audience is left in suspense. In conclusion, Angela Carta uses many techniques to illustrate the game show scene in which the reader can feel a part of, it is funny, farcical yet sad. The narrative structure creates the intense atmosphere, yet the show itself is humorous as cruel humour is derived from other peoples sadness. Grace Sung ...read more.