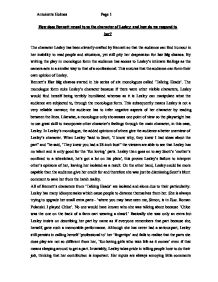 How does Bennett reveal to us the character of Lesley; and how do we respond to her?

How does Bennett reveal to us the character of Lesley; and how do we respond to her? The character Lesley has been cleverly crafted by Bennett so that the audience can find humour in her inability to read people and situations, yet still pity her desperation for her big chance. By writing the play in monologue form the audience has access to Lesley's intimate feelings as the camera acts in a similar way to that of a confessional. This ensures that the audience can form their own opinion of Lesley. Bennett's Her big chance started in his series of six monologues called 'Talking Heads'. The monologue form suits Lesley's character because if there were other visible characters, Lesley would find herself being terribly humiliated whereas as it is Lesley can manipulate what the audience are subjected to, through the monologue form. This subsequently means Lesley is not a very reliable narrator; the audience has to infer negative aspects of her character by reading between the lines. Likewise, a monologue only showcases one point of view so the playwright has to use great skill to incorporate other character's feelings through the main character, in this case, Lesley. ...read more.

Not only does she interfere with the director's work but she then tells the audience that 'it's wonderful, that moment, when you feel a director first begin to trust you and you really start to build.' Here she misreads the situation as Gunther probably didn't want her to talk because she is no good at acting and she only needed to look good anyway. Another thing Lesley hadn't realised was that with all her interfering over the making of the movie Gunther had probably figured by now out how to get what he wanted out of Lesley. An alternative example of this is going back to Lesley's audition where she couldn't help but make a suggestion, "reading generally indicates a studious temperament and I'm a very convincing reader... because it's something I frequently do in real life.' I could tell he was impressed." She then carries on just because Simon was acting impressed out politeness. Even when he was showing her out she didn't get the picture and suggested putting "Travis in a bikini and give her a briefcase." Not only are these terrible ideas but she could have easily blown her audition if they based it on talent. ...read more.

At the end of the play Lesley is back where she started, in her small desolate flat. This reveals to the audience despite having just performed in a movie she has gotten nowhere as a result. In a way, Lesley can also see this unkind truth as she ends by saying that she would like to 'acquire another skill' like 'selling valuable oil paintings' or 'canoeing.' As she feels that the more you have to give the better you are as an actress. This in her case is true because she doesn't have much talent to give and is also a bad actress; it is also similar to her habit of sleeping with people. She gives them what they want and sometimes she'll get a part. She rounds off by saying 'acting is really just giving.' This line sums up her career, which is quite a sad thought, but she only ever gets used and nothing really comes out of it, because she is left in her tiny flat again on her own. On the surface Bennett develops Lesley's character so the audience can only abhorred her and her traits, but underlying the viewers could quite possibly feel sympathetic towards her as despite all she went through she still didn't get her big chance. By Antoinette Holmes ?? ?? ?? ?? Antoinette Holmes Page 1 ...read more.